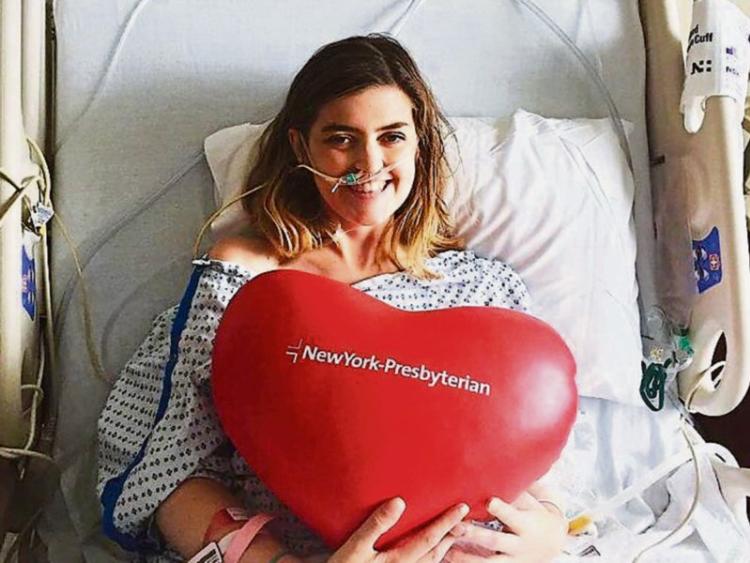 The documentary on Newbridge woman Orla Tinsley was tough to watch for anyone, but especially anyone who knows her or her family.

Orla Tinsley: Warrior appeared on RTÉ last Monday night week . It opens showing her in New York, where she has lived now for some years, moving slowly around a museum or into Columbia University where she is studying for a masters in creative writing, pulling an oxygen canister,  tubes around her face. She is failing, and regular updates on her lung function throughout the programme start at 25% and go only in the wrong direction.

Her parents feature heavily in the programme, always putting on a brave face, but there’s no mistaking the growing stomach-tightening anxiety.

Her coughing, throughout, is constant, as she fights to clear her lungs of mucous that gathers in them as a result of Cystic Fibrosis, a genetic condition she has had to face  all her life.

And as regular readers of the Leinster Leader will know, she has also bravely fought governments, ministers, the HSE and hospital administrations to get, for the first time in Ireland, appropriate care for people with CF.

The fact that we know how it all ends is a constant source of relief, and possibly also a way of avoiding fully comprehending what we’re watching.

Because as we see her coughing up mucus, showing us a lunchbox of all the blood she has coughed up overnight, the scenario we don’t want to contemplate, let alone face, is becoming unavoidable.

Eventually, she names it for us in the adroit bravery that is one of her defining characteristics: “I’m dying”.

It’s not hyperbolic. It’s an analysis of the prevailing situation, a statement of fact.

At one point she speaks directly into the camera: “I feel like I’ve had a great life. I’ve accomplished what I wanted to accomplish. Go after your dreams. Don’t worry about what anybody else thinks,” which sounds like the kind of thing that only those who have reached the searing clarity of thought that impending death can give you can say. It also sounds like particularly good advice.

We see her get call after call about a new pair of lungs, each time to be told that it’s not going to work out. It’s awful to see it, and Orla’s determination to be unrelentingly positive about it each time is extraordinary.

Towards the latter quarter of the programme, we are told she went into respiratory failure, and was breathing with the assistance of a machine.

Then another call comes through that lungs might be available. They’re checked, and approved and just before last Christmas, she gets a pair of shiny new lungs, as she says herself.

The transformation is astonishing. To call it a rebirth is not an exaggeration. She speaks with a clear voice, and walks jauntily with her mother along the footpath in Manhattan.

Although she has to wear a mask outdoors for the first while, and stay on anti-rejection drugs for the rest of her days, it is comparatively speaking, a life unimpeded.

She speaks with gratitude for her donor, and of the sacrifice that person and their family made.

Organ donation is one of the greatest miracles of  medicine. It can  bring somebody back from death’s door.

The difference it has made in her life is stark and unavoidable. And the message was well received — it’s reported that thousands signed up for it after the programme last week.