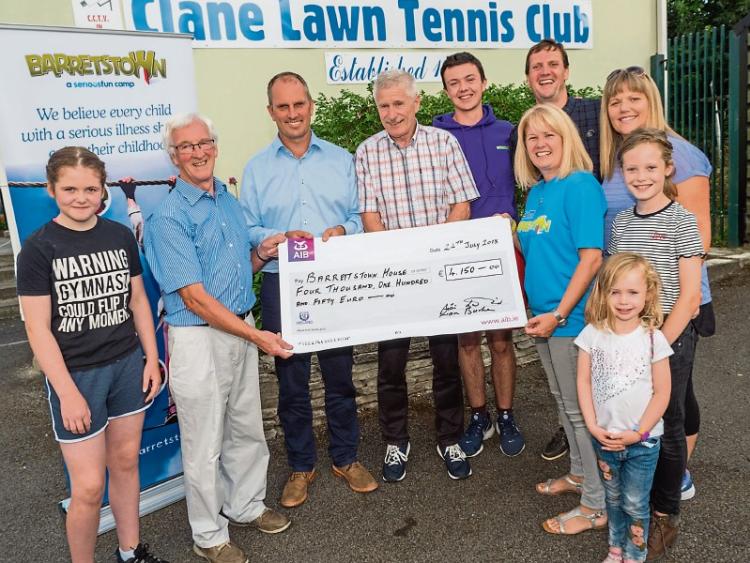 Over €4,000 was raised by members of Clane Tennis Club which took part in a 24 hour marathon at the club recently.

The event, the Ben Wallace Memorial Tennis Marathon, now an annual one at the club, led to the members presenting the money to the Barretstown Camp project which helps sick children and their families.

There to receive a cheque for €4,150 was Orla Wallace and Ava, mother and sister of the late Ben, who was a keen member of the club as a teenager.

A wide variety of members took part in the marathon which began from Saturday, June 9 at 12 noon and ended with some very tired players on Sunday, June 10, also at midday.

Club chairman, Sean Lavin, thanked all those juniors and seniors who took part, including a small input from 84 year old Thelma Skoles.

The leading team of players was Barry Kiely, who was once a doubles partner with Ben Wallace, Colin Grey, Claire Dalton and Edel Dwane.

Orla and Ben’s sister, Ava, who plays with both Caragh Celtic and Raheens, thanked the club for its support.

They said Barretstown had been great for Ben and his family. Ben died on June 9 2015 from leukaemia following an inspiring battle against cancer.

Originally from Caragh, he attended Piper’s Hill in Naas, which has the Ben Wallace Inspiration Student Award in his name. Sean said that apart from his tennis skills, Ben was “a gentleman.”