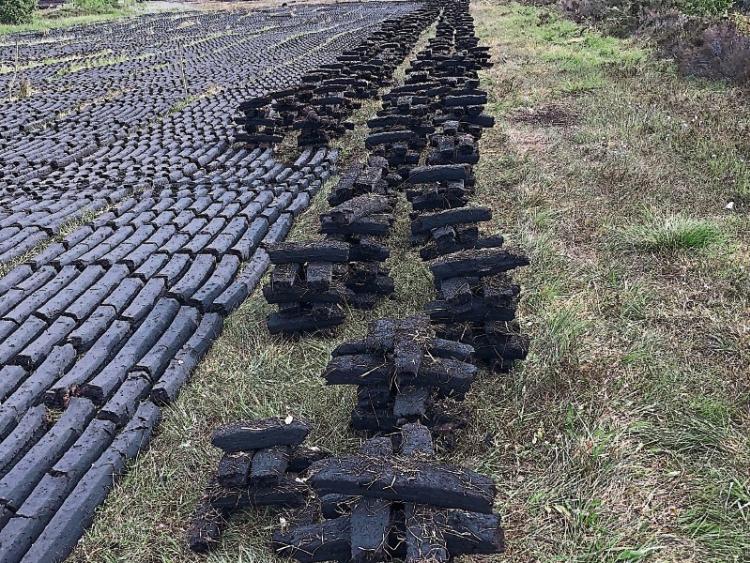 Last Monday night I was in the bog for an hour, and made great progress for about 45 minutes, before the halo of flies around my head made it less than bearable.

I headed for the hills, resolving to come back early the following morning.

So, at approximately 6.15am in the stillness of Tuesday morning I arrived back to Closh bog (known to the authorities as Hodgestown).

If there had been a dusting of dew overnight, it was long gone, now that the day was about two hours old.

There were more rabbits than usual there, less concerned with humanity than normal.

And I wasn’t shy of human company either. In at least two plots beside me were cars parked just off the road, and men hunched over, moving through the rows, lifting sods, unconsciously feeling the weight and the give in each one to calculate how wet or otherwise, piling them two by two, three or four or five stories high.

Bent over, with that familiar pain in the backs of my legs, I was prompted to consider, not for the first time, that generations of us west Kildare folk have done precisely this. We have felt the same pains, have felt the weight of the sod and softness under our thumbs.

To this day, the small-scale harvesting of turf remains one of the few activities that cannot be done entirely by one human and their machine, and as such, a vital element of it is entirely unchanged from the experience of our ancestors millennia ago.

My four decades of memories of the bog bring to mind generations of family, immediate and extended, and of neighbours, engaged in hours upon hours of backbreaking work — footing, bagging and drawing home in a trailer pulled by an ancient tractor.

Bog dust up my nose, bog dirt under our fingernails, the softness underfoot, the faint scratch of the heather, the endless variations of brown and green — and the weariness and hunger that only a day in the bog could prompt.

Most of all, I remember the smell of the place, and the peace — interupted only by a far-off tractor putt-putting its way slowly across the bog or a dog barking in the way off indeterminate distance.

It is inescapable, the end is nigh for the burning of peat in this country of ours.

Between environmental directives and the establishment of Special Areas of Conservation, there is pressure from above to let the bogs return to nature.

Closh bog was named as a Special Area of Conversation some years ago and an attempt was made to get us to stop cutting on it.

We have a reprieve for now, but we don’t know for how long.

And then there is the march of technology.

Yes, there have long been far more efficient forms of fuel, of sources of heat, but it has always remained comparatively reasonably cheap, although that is now finally changing.

And then there’s the smell, an evocation of memory that slots in neatly beside our recollections of sitting at the table of a kitchen in an old house in the country, perhaps of a long deceased loved one, with tea and homemade brown bread, wax table covers and the dog lying in the corner ignoring all the chat about everything and nothing.

These are intangible things that mean nothing to those who speak of SACs and carbon credits.

On Monday night when I arrived there, I met a man and his young son working away, their bicycles discarded just inside the entrance to the plot.

He was footing his father’s turf, he told me. “I don’t burn it myself. I have geothermal.”

Our houses are now so well insulated and stuffed with the best of technology, keeping us warm with little effort, that burning anything for heat is not only unnecessary, it actually leaves the house uncomfortably hot.

And on so many levels, that is nothing but a good thing — but I was left to contemplate everything that drove him to be there, helping his dad, showing his son how to foot turf on a long summer’s evening.