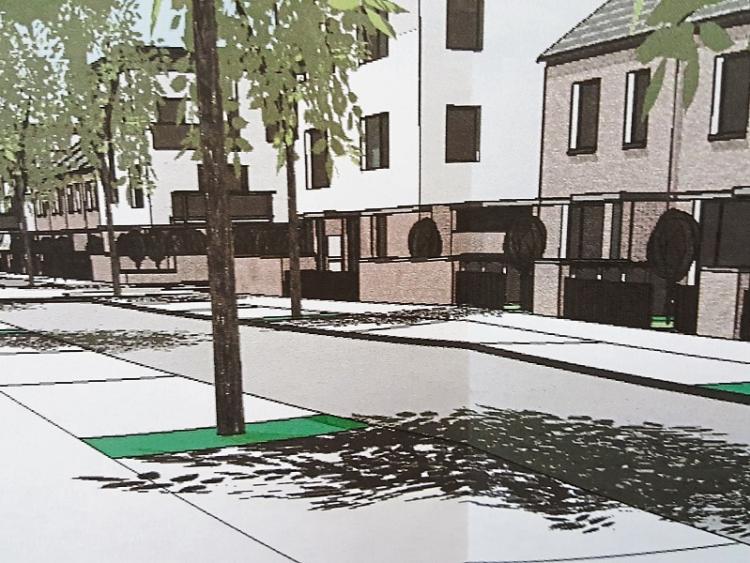 A computerised image of the Nancy's Lane social housing project

A parcel of land with planning permission for ninety housing units in Clane has gone up for sale.

The land is at Nancy’s Lane, not too far from where Kildare County Council passed a Part 8 development for 77 social houses.

Both developments will have been considered with traffic in mind.

Access to the 9.4 acres land for sale is from Collegewood Manor Road, off the Ballinagappa road.

An Bord Pleanala granted permission for it on April 24 2009 and this was extended in a 2013 permission until April 19 next year.

It involves a creche, which must be built after 45 units have been constructed.

No work is to start until the Osberstown Wastewater Treatment plant and other elements could cater for it, the Board said.

That is not the case at the moment, it appears.

Last summer, a proposed 34 unit housing project for land near Lidl was turned down due to insufficient capacity.

Bord Pleanala said it was premature “due to the existing lack of capacity in the Clane wastewater network, including the Clane foul pumping station and other sewer network constraints in the area between Clane and Osberstown Wastewater Treatment Plant, which deficiencies will not be rectified within a reasonable period.”

Kildare County Council had refused permission to the Presentation Sisters (North Province) in 2008 on the grounds these had not yet been provided.