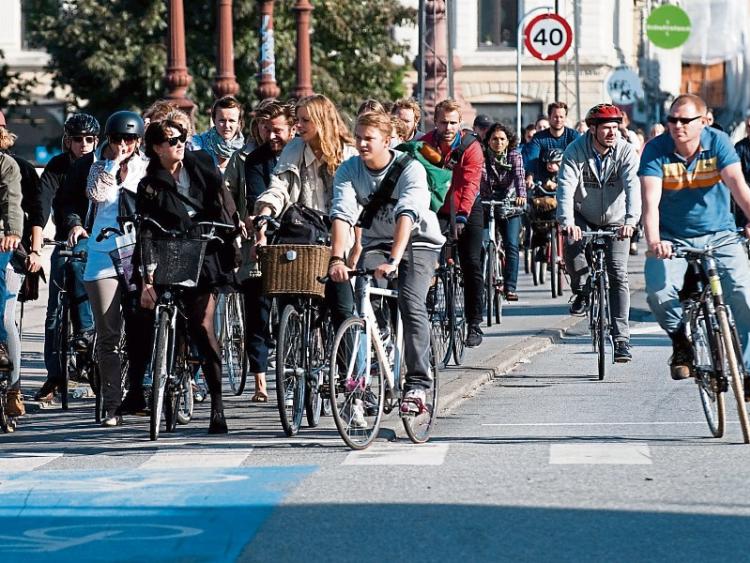 On the occasion of Bike Week 2018, we need to finally stop being polite about it.

We need to stop trying to convince people of anything or doing any promotional campaigns, nice gestures, high viz safety training, awareness programs, head counts or presentations to schools.

It’s simple — we need to plough on and build proper cycling lanes.

We’re still mired in the inherent contradiction of trying to accommodate cyclists beside drivers while trying to make things safer for them.

It’s not working. Every morning and evening we have plenty of time, sitting in traffic jams, to see the results of the inaction and apathy.

The average urban street can process 2,000 cars per hour or 14,000 bikes. That’s because cars are the least effective form of transport and bikes are the most effective.

But that simple comparison also shows that a small amount of proper cycling infrastructure can make a huge difference.

People don’t need to be educated or cajoled into cycling. They already want this, really really want it.

They hate being stuck in traffic, hate spending half an hour in the car to drive a kid less than two km to school when the kid could dawdle the whole way on a bike and still get there in 10 minutes.

They hate that they are afraid to let the kids out on their bikes. They hate driving around looking for parking, spending a small fortune on the ticket, looking for change for parking and then having to walk 15 minutes to a shop they only want to spend five minutes in.

The Dutch are even more radical. In the 1970s they realised what we’re slowly learning — that accommodating a greater numbers of cars is officially a lost cause.

So they put down cycling lanes and cut off streets to cars, literally overnight. As a nation they are not noted for bad investments, and now, 40 years later, they consistently spend billions on cycling facilities.

The Great Western Greenway (from Westport to Achill) is a tremendous tourism attraction, but to the surprise of those who built it, peak usage is when children are going to and from school.

That shows that safe cycling and accessible infrastructure, which takes the shortest route from one relevant place to another will be used, even if that’s not the intended usage.

You’ll hear the naysayers referencing the lack of use of the cycling lanes in Naas’s Millenium Park as ‘proof’ that cycling lanes don’t work.

But they only go from the start of Millenium Park to the end of it, two places nobody ever needs to go to.

Naas Neighbourhood Greenway’s idea of linking all schools and housing estates in Naas, Sallins, Kill and Johnstown is the right idea. It connects people to where they actually need to go.

We also need to decouple the notion of putting cycling lanes alongside existing main streets. We don’t have wide streets, so we can’t simply put down paint and move cars out a bit. A little imagination is required.

For instance in Amsterdam, they have a cycling highway going through an old and unused shopping centre.

Since independence, Kildare’s population has doubled roughly every 25 years, so by 2050, we will have a population of nearly half a million. It’s time to get our transport systems sorted now.

Otherwise we face the prospect of 150,000 mammies losing hours of their lives, and the will to live, dropping their kids off every morning.

In any given situation, people will always want to take the easy way.

Appealing to their sense of public duty or telling them it’s the best thing they can do for their longterm health is true, but unnecessary and in vain.

If we just make cycling the easier option, they will go for it.

We just need to grow a thick skin, ignore the nimbys and naysayers and build lots and lots of cycling lanes, and they will come.