A vigil for the Great Return March in Gaza 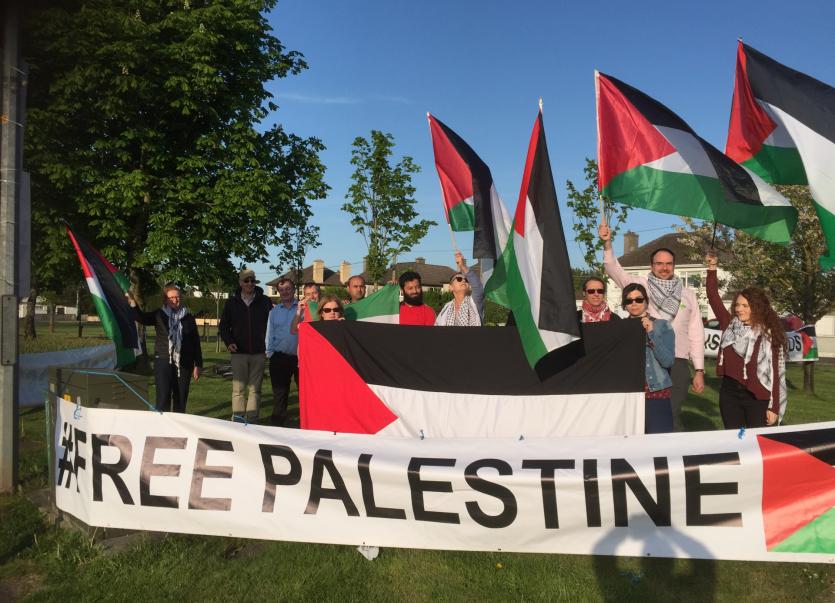 Newbridge residents who turned out to show their support for the Great Return March in Gaza, including Leo Casey, (second from right) who was deported from Israel in March, without explanation

A vigil for the Great Return March in Gaza was held in Newbridge yesterday evening to show solidarity with the 60 Palestinians killed by Israeli snipers on Monday.

"The vigil, attended by about 20 people, drew a lot of support from passing cars, an indication of the outrage felt throughout Ireland towards the Israeli aggression against unarmed demonstrators," said the organisers.

"May 15th marks the 70th anniversary of Nakba Day – the Day of the Catastrophe – the day on which Palestinians everywhere commemorate the ethnic cleansing in 1948 of over 750,000 indigenous Palestinians from their homes, two thirds of the Arab population of the time, forcing them into exile so that the state of Israel could come into existence."

The vigil was attended by Leo Casey, one of two Kildare people deported from Israel in March.

Mr Casey was part of an Irish group travelling to Palestine to learn about the situation there but he was refused entry to Israel at the airport in Tel Aviv.

"Although it was his first trip, no valid reason was given by Israel for his deportation, which included a 10 year ban on attempting to reenter Israel," said the group.

Mr Casey read out a statement from Ahmed Abu Ratima, a freelance journalist and one of the organisers of the Great Return March in Gaza.

The statement said: “Dear brothers and sisters, the Right of Return is the heart of the struggle for Palestinians. The first generation of refugees has been passing down the right of return and love of their villages and towns that they were forced to leave 70 years ago to their children and grandchildren. This is one of the main reasons behind the massive response to the march of return, which brought together all political and social groups.

“Gaza has been under a deadly siege for 12 years. The humanitarian situation in this narrow geographical area has reached catastrophic levels. Gaza is a real prison of no more than 365 square kilometers, where two million, two hundred thousand people live, 70percent of whom are displaced refugees.

"They cannot leave because of the siege. Unemployment is high especially among the young generations, which prevents them from having their basic rights. The health service system as well as the economy are catastrophic. All of these factors were meant to push people to the brink of death and despair. But the march of return proved that the forces of life in the Palestinians overcame the forces of death.

"The besieged people of Gaza decided to turn these harsh conditions into a force in the face of the origin of the problem which is the Israeli occupation. The Palestinians in Gaza challenged the occupation, even as the occupation bet on killing the will of life among them when hundreds of thousands marched to break the siege and to announce to the world that we will not die silently and to say, enough with this life of oppression and humiliation.

"We take pride in your standing with us and we appreciate your commitment to the human conscience. In order to reach the inevitable historical moment of freedom, return, and self-determination, we have to work together. The Palestinian cause is a just cause. Peace be upon you. Your brothers and sisters in Palestine.”

The Kildare Palestinian Solidarity group said; "As recent events make clear, the Palestinian catastrophe is a process ongoing to this day, seventy years later.  Since the start of the Great Return March in Gaza over 100 unarmed protesters were shot dead and thousands seriously wounded. The Irish government has condemned the shootings but has done nothing to sanction the Israeli state for these crimes."

SEE ALSO: The Nook in Newbridge is closing its door after 30 years in business