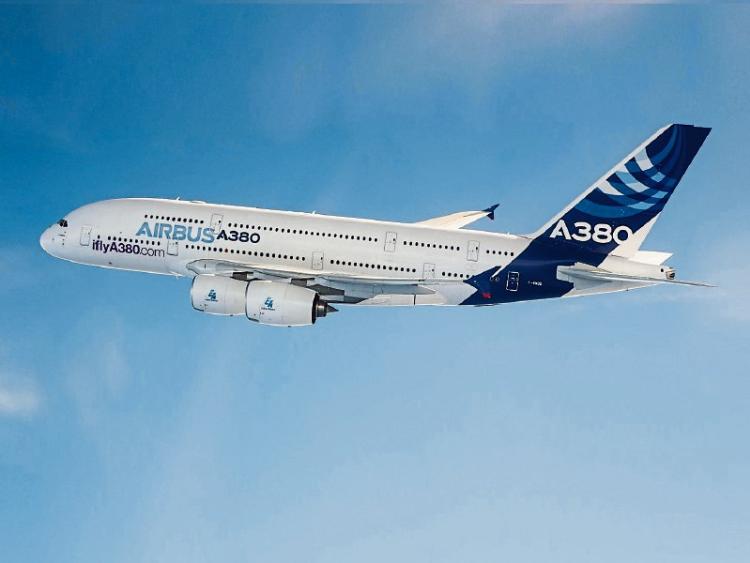 Some morning during the week of the good weather, when the sun was shining gloriously, as I left home I happened to glance towards the heavens and see what appeared to be a very large airliner leaving a trail across the sky.

I zoomed in with the camera on my phone, took a picture and posted the grainy image up on Facebook saying that I wondered if it was an A380.

To the uninitiated, the A380 is the world's largest passenger airliner, so big, in fact, that some airports need to extend their runways to handle it.

It’s made by Airbus , each one costs €365 million to buy and it can carry 525 people in a double decker configuration.

Somebody commented: “You should have checked it on Flight Radar”.

It turns out that Flight Radar is actually an app for your phone that will show you all the planes in the sky at any given time (there are thousands).

The app obviously connects into air traffic control systems, and so if you tap the icon for any of the planes it will tell you what make of plane it is, who the airline is, its registration, where it is going to and from, how far into its journey it is, what speed it’s doing and how high it is.

The following Saturday, April 21, was a lovely day of warm sunshine and I was outdoors when I saw a number of planes in the air, all at once.

I took out my phone and had a look. It turns out that as well as having three of Ireland’s motorways passing through it and two railways, Kildare is for some reason, a superhighway of the skies as well.

All that morning I watched planes flying from Istanbul to Montreal, from Warsaw to Washington, from Riyadh to Newark, from Paris to San Francisco, London to Denver, Frankfurt to Las Vegas, Amsterdam to Toronto, Los Angeles to London and many many more.

And, invariably, every third or fourth plane was a Ryanair from Dublin to Fuerteventura, Newcastle or Copenhagen.

There are plenty of them up there, at least one flying over Ireland at any given time.

For some reason, the usual information on where they were coming or going was not supplied.

Over the course of the weekend, I saw one travelling from Malaga to Dublin and back.

Damned if I know why all of these planes seem to pass over Kildare.

Are there not shorter ways from Ankara to Vancouver than to take a detour over Rathangan?

And what must the passengers think as they look down on our lovely county?

On a clear day like that one was, can they make out the green of the Curragh, or do they wonder at the large brown patches, or have they ever heard of Bord na Mona?

Do they see the campus of Maynooth University or the Leinster Aqueduct or Whites Castle in Athy?

I wonder does the Captain announce in their captain-y voice that “we’re now passing over the Hills of Wicklow and the bogs of Kildare, and don’t blink or you’ll miss the Hill of Allen (or what’s left of it).

“And those straight lines you see are the canals, the Royal to the north and the Grand, a little south of that.”

I’m pretty sure they must have also been able to see some of the potholes on the Blacktrench road and the derelict Naas Shopping Centre.

It might be nice to think they thought, from that far up, that it looked pretty, and inviting.

But sure they probably didn’t even look out the window at all!