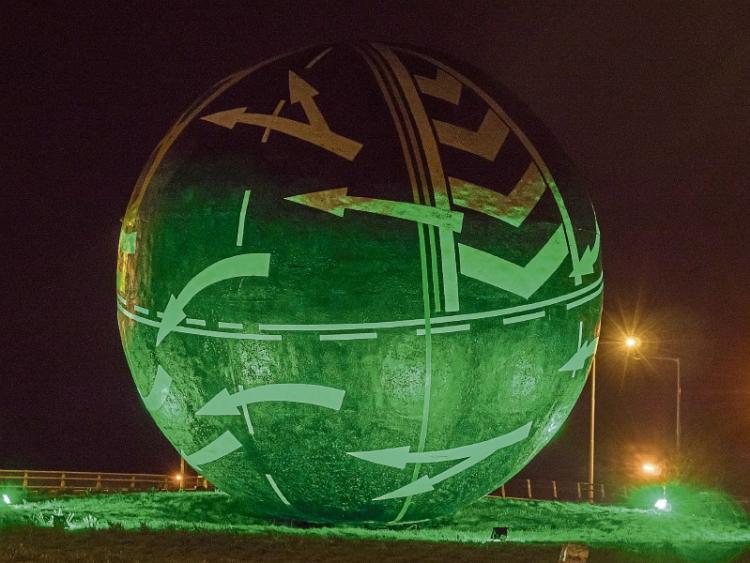 The Lord giveth and the Lord taketh away. And so it was that two things of note happened in Naas last week.

The Big Ball was lit up in green, at least partially.

You’d have thought that applying pieces of green plastic to the lights already in place would have been a simple enough proposition.

But no. This proposal was tossed between Kildare County Council and Transport Infrastructure Ireland, which oversees the motorways. TII said it was happy (well, what it said was it had no objection in principle) to the idea, provided KCC was satisfied it “will not interfere with driver safety.”

KCC, understandably didn't like the cut of TII's jib, so to speak and TII then sought to get a maintenance contractor for the route involved.

The councillors were in favour.

And they spent some time talking about it.

One, Darren Scully, stressed that it was TII's decision to make and he was critical of the failure to allow the big ball to be decorated as a giant golf ball for the Ryder Cup of 2006, hosted in K Club.

It seems that it feared that this would distract motorists.

That’s why you see only limited signage on the motorway directing drivers off the motorway to places of interest in Naas and elsewhere. Too many things to look at equals too much distraction. If TII is in doubt about where the border lies between nannyism and common sense, it’ll err on the side of nannyism.

Anyway most of the ball turned green and it provoked a small flurry of happy clappy social media excitement.

But the greening of the ball is nothing more than a diversion, a distraction. As the Naas councillors talked about this two members of the Sallins Community Council, including chairman Fergus Carpenter, were in the council chamber and were understandably annoyed that so much time was being spent on the ball and so little on issues tabled by independent councillor Sorcha O’Neill, which would improve road safety in Sallins.

The lights had hardly changed colour under the ball when the Lord decided he’d given enough and lighting of a different kind appeared on South Main Street.

The Forge Inn, effectively part of the concrete skip that is the Naas Shopping Centre, went on fire.

Nobody was injured. Kids with too much time on their hands are being blamed, as they were for the fire within the NSC eight months ago. There is speculation that homeless people may have started it. Since the first incident a security company has been deployed to a place that’s been vandalised but that has hardly got anything worth robbing.

The bills continue to mount in and around the shopping centre. The security company has to be paid as have those charged with trying to find a buyer - though it has yet to be put on the market.

The NSC is turning out to be a very expensive project for the taxpayer. Millions upon millions have been spent while not so much as a carton of milk has been sold within it. NAMA has been answering questions about how it’s conducted business elsewhere.

The security company has now put up a sign at the Forge asking parents to warn children about trespass. How about a sign asking NAMA what’s it been doing about finding a buyer for the building ?

In the aftermath of the fire it was noticeable that the e at the end of Forge is missing.

It’s only five letters from Forgotten.