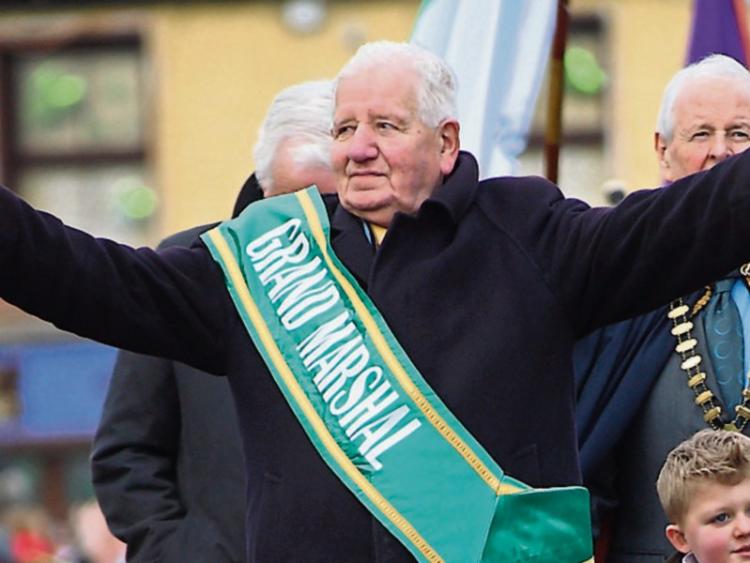 When sorrows come, they come not in single spies but in battalions. The words of Claudius, the uncle and step-father of Shakespeare’s Hamlet, written 415 years ago in 1603, were never truer than last Wednesday morning when the people of certain parts of Kildare and certain generations heard of the passing of three of the county’s finest.

Del Weld was in his 97th year was a son of the Dag Weld, the man who established and put his name to one of the county’s most famous pubs.

Del also grew up there, and one has to wonder if it was there he developed that twinkle in his eye and lovable roghuishness that most who knew him will remember him for.

The artist Zita McGarry Kelly wrote and posted a lovely tribute poem for him on hearing of the sad news.

“To keep his craft and style preserved/ his presence felt at every show/ to pass that gentle crit,

that nod approved/ And at the end/ To bring that curtain,/to its final close, /a standing ovation to a lovable rogue,” to quote the last verse.

He died peacefully at his daughter Joan’s residence on Tuesday March 13.

He was the beloved husband of the late Kathleen (nee Diamond).

Before we’d drawn a breath following that sad news, word filtered through of the the passing of Edin Ward, another great character from the Blackwood/Coill Dubh and Cooleragh area who lived to the ripe old age of 102 and was sharp as a tack right up to the end.

I interviewed him a couple of years ago and felt that his life story, which encompassed the birth of the nation, the economic wars, the second world war, the foundation of Coill Dubh and much else besides, would have made a great film as a narrative to tell the story of the first century of the Irish nation.

Born in 1916, he was best known for owning and running a shop in Cooleragh near Coill Dubh. In recent years he wrote Edward Ward, My life story – My memoirs and Observations which recalled buying a lorry for £200 in the 1940s, that a tankful of petrol for the lorry for a £1, and that a good weekly wage was £5.

Edin was heavily involved into the GAA. I played football with Caragh for years, and also refereed the Leinster final between Carlow and Meath in 1948.

He died peacefully on Wednesday, March 14, in the care of the staff at Parke House Nursing Home, Kilcock.

Beloved husband of the late Rose, he will be sadly missed by his nephews J J, Butsy, Johnny and Gerry, nieces Teresa, Mary and Breda, brother-in-law John and his wife Mary, Mary Balfe and all his carers, neighbours and friends.

Eden married his girlfriend of 40 years at the age of 87 (which must be some record). Rose Murphy had worked with him for many years in the shop and when she died on March 15, 2012 he admitted in his book “I was then, and still am, shattered by the loss”.

And then we heard the sad news of the passing of Liam O’Flynn, known to some as Liam Óg O Floinn and known to all with even a passing interest in music as the finest proponent of the uilleann pipes of his generations.

He was also known as one of the fab four founding members of Planxty along with Andy Irvine, Donal Lunny and of course, Christy Moore.

Born into a musical family in Kill, he attended local schools including Naas CBS. His father was a teacher and fiddle player and his mother, who came from a family of musicians from Clare, played and taught piano.

From an early age, he showed talent and at the age of 11 began taking classes with Leo Rowsome, one of the greatest pipers of his time. He was successful in the Oireachtas Festival and the Fleadh Cheoil before forming Planxty with Christy Moore, Andy Irvine and Dónal Lunny, all of whom are now regarded among the pantheon of greats in Irish music.

It’s believed O’Flynn taught Christy Moore how to play the guitar and bodhrán — and sure, for that alone he can be considered a national treasure.

The four members first came together during the summer of 1971 to record Moore’s second solo album, Prosperous, recorded in the village of that name.

At his funeral last Friday, a poem by Steve Cooney’s poem, God’s Glue, was recited. The poem ends:

“As O’Flynn worked his bellows;

With these worthy fellows;/Joy spring from hearts through the room;/ For these deft believers in great warp and weft;/ Were weavers upon God’s Loom.”

In a tribute former President, Mary McAleese wrote; “The Master Piper is dead.”

All three of these fine Kildare men lived to a great age, although Mr O’Flynn less so than the other two - and left behind legacies and memories.

Their passing is our loss.