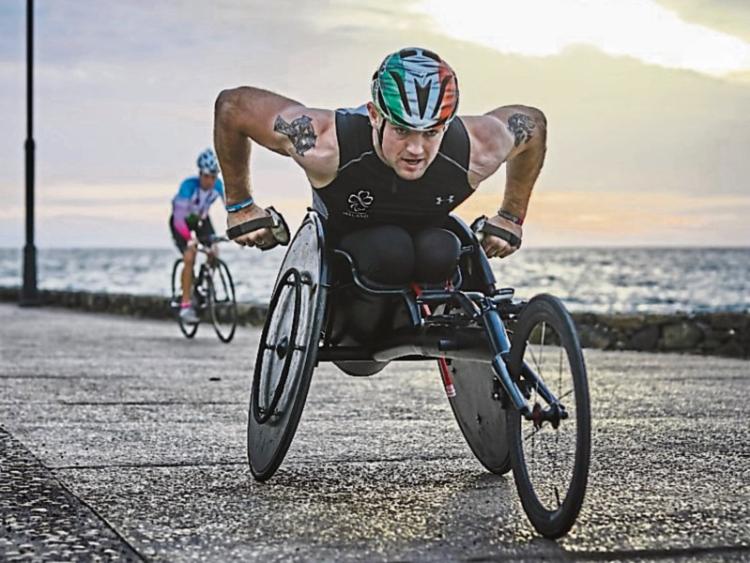 Patrick ‘Pa’ Monahan is an Irish Wheelchair Racing Athlete from Caragh. He has competed in numerous marathons and at the Rio Olympics. He is the son of Michael and Ann Marie, and has three brothers  Justin, Eoin and Paul. He attended Caragh N.S and then Naas CBS.

I have great memories from growing up in Kildare. Living in the country, me and my brothers spent most of our time outdoors. Football would of been big in our family, and I also had three cousins next door so we spent most of our time together, either playing sports or running around the surrounding fields, and I remember my mam calling us in for dinner!

I also remember spending a lot of my time kicking footballs around Raheens GAA while  my dad was still training and playing.

For me, it's the Japanese Gardens and National Stud. On a summers day when the foals are out running around.

WHAT WOULD BE YOUR IDEAL DAY OUT IN THE COUNTY?

I love going for a walk (or a wheel for me) on a spring /summers day! Either out to Donadea Forest Park or Castletown House.

A bite to eat after that and I would be happy!

BEST PLACE TO EAT OUT?

I would have to say Picaderos in Maynooth.

WHAT DO YOU THINK GIVES KILDARE ITS UNIQUENESS?

I think for me it's the Curragh. It's unique as it's so vast I wouldn't say I've seen half of it. From the flat plains to the landscape around Donnollys Hollow.

Seeing the horses out on the gallops as you drive by to the Army Barracks.

There is so much going on around the Curragh.

HOW IS RACING GOING?

Racing is going well. I've had a tough winters training so far.

The weather hasn't made it any easier!

Hopefully it will pay off over the coming months.

I have plenty of competitions coming up this year. London, Boston, Chicago, Berlin and Dublin marathons to name a few.

Away from racing, I also have my brother Paul and Best Friend Donal O' Kellys weddings to look forward to, so exciting times on both fronts!