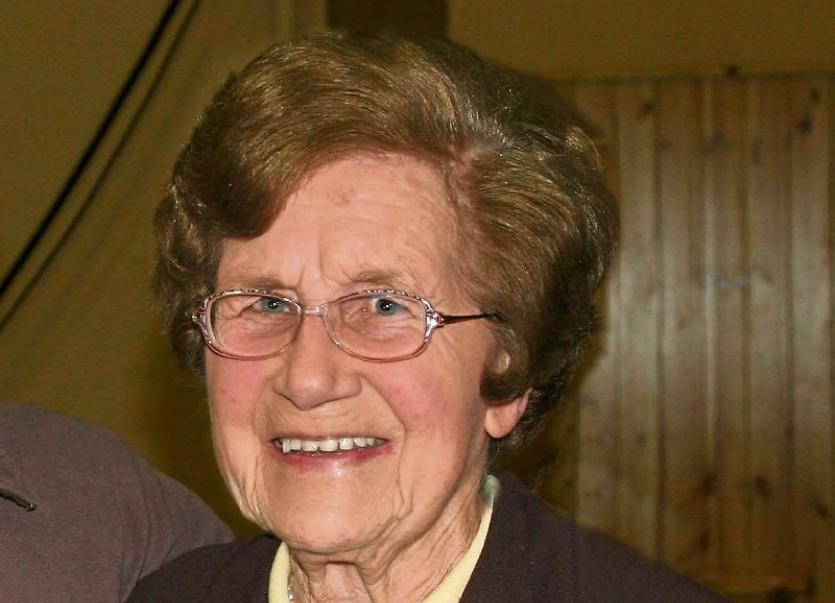 It was with great sadness the community of Newbridge learned of the passing of Sheila Bell, nee Walshe, on February 8 last.

Sheila was born in 1924, in Moorefield Villa on the Moorefield Road, Newbridge, where she spent 88 years of her life.

Her later years were spent in the caring hands of the staff in Curragh Lawns nursing home.

Sheila was from a family of five; she had three sisters and a brother, all now sadly deceased.

Her dad, Patrick, was a stonemason who worked mostly making headstones. His headstones could be found in graveyards all over Kildare and Sheila took great pride in bringing her children around the county in search of his work.

Music, drama and sport were a major part of Sheila’s life. She met her husband Billie Bell, from Loughbrown, at a dance in the Town Hall.

Billie was an employee of the Irish Ropes factory and a staunch Moorefield supporter. They married in 1948, and were blessed with a family of four boys — Pat, Peter, Dan and Billy.

Sheila supplemented the household income by teaching piano and probably her best known pupil was the former Tánaiste, Frances Fitzgerald.

She rarely missed a play, show or musical in the town. She was a former member and a great supporter of the St Conleth’s Pantomime Troupe. Every year without fail, Sheila, with her great friends Loretta Donnelly and Betty Cummins, would head over to the CYMS in Kildare town for the annual Drama Festival. Many hours were spent each night critiquing the performances and the adjudicators would also come in for some flack.

Sheila had diverse sporting interests. As a young girl she played tennis with the Newbridge Tennis Club, which was situated on the way into Páirc Mhuire.

Within two years of joining the Irish Ropes Pitch and Putt club, she won a Leinster title and was runner-up on another occasion.

She served on the committee in Ryston for 40 years and was Ladies Captain on four occasions.

Playing cards was also another passion of Sheila’s, and if the weather didn’t permit a game of pitch and putt to go ahead, then it was into the clubhouse to play cards.

Having lived on Moorefield Road all her life, Moorefield GAA played a big part in Sheila’s life. Her father was involved in the club back in the late eighteen hundreds and early 20th century.

Billie, her husband, played for Moorefield and Kildare, and on retiring from playing he served as club chairman and treasurer and sat on several County Board committees.

Sheila was always available to lend support and help out whenever needed. She loved going to matches and took great pride in the club’s successes since 2000.

In more recent years, Sheila took great pleasure in following the fortunes of Kilcullen, where her grandchildren Brian, Paul and Karen play.

Sheila and her husband Billie were also passionate greyhound racing and coursing fans.

When Billie would finish work in the factory, Sheila would have the picnic packed, and when he would pull up at the front door with Archie Brecknell in the passenger seat, the rest of the family would clamber into the back of the car and head off to the track.

In 1977, after Bells’ dog Irish Bawn won the coveted Ned Donnelly Memorial Cup, Sheila’s life and that of her family was changed forever with the sudden passing of her husband Billie.

Sheila, being a strong and determined woman dealt with life’s challenges, and after Billie’s death she devoted herself to rearing her family.

She continued her involvement in her many hobbies and pastimes, and was a great friend to the many who were lucky enough to have known her.

May she rest in peace.