Plans to "pay off bills" 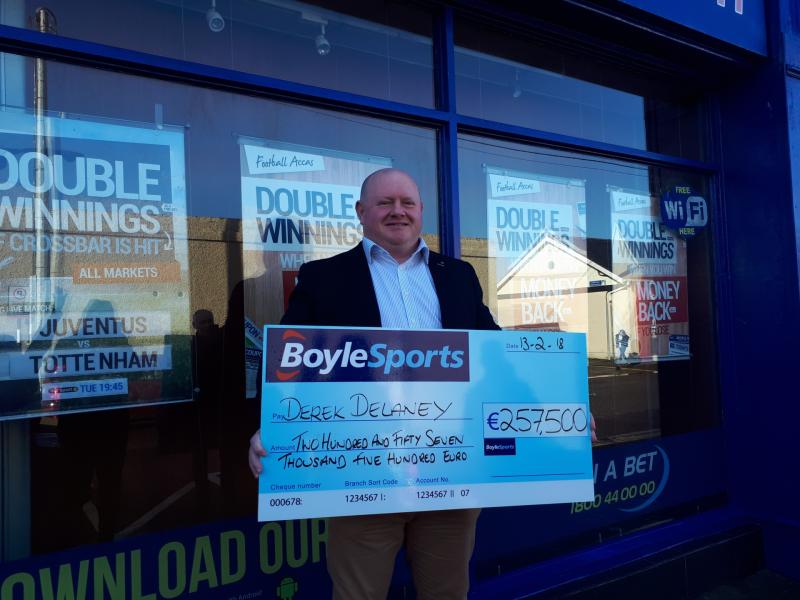 A Kildare Town man has today collected his winnings after placing a lucky €3 bet on the Lotto Plus 1 draw over the weekend.

Derek Delaney, who works with the local authorities, was handed a cheque for €257,500, from BoyleSports Newbridge. He was accompanied by his wife Lorraine and son Adam (10).

Derek places a bet on the lotto numbers nearly every Wednesday and Saturday from his local bookies, so couldn't believe his luck when his numbers were picked out.

"Sunday morning, lying back in bed after the breakfast, my phone was powered off so I did the Teletext, old style, checked the first one and the main draw, no numbers there, and Lotto Plus 1 and I realised then, because I go by birthdays and that. Same numbers every time", said Derek.

"Then we made a couple of phone calls, I rang BoyleSports, I think your man nearly fell off his stool as well!", he laughed.

Derek said it was a good feeling, and felt the "pressure off" when he got the good news. "Lorraine couldn't believe it."

Derek plans to pay off bills, and go for a spin with his family to celebrate tonight.

SEE ALSO:  After 25 years at An Chistin in Newbridge, Donie and Siobhan have decided to hang up the apron strings