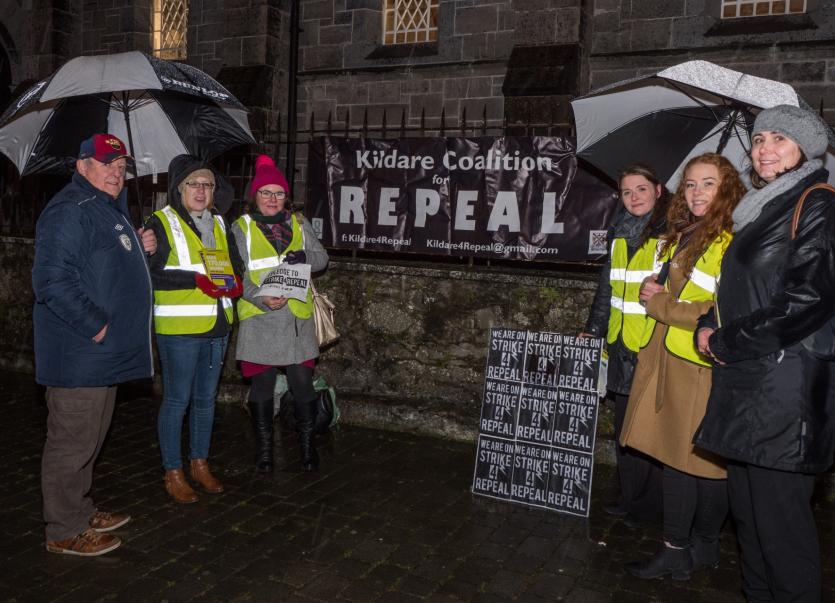 Some members of the Kildare Coalition for Repeal at the protest outside the Town Hall in Newbridge last Wednesday. Picture: Tony Keane

Members of the Kildare Coalition to Repeal the 8th from Newbridge, Kilcullen and Kildare Town took part in a solidarity demonstration outside Newbridge Town Hall last Wednesday, January 11.

The protest was held to coincide with the Strike4Repeal demonstration that was taking place outside Dáil Éireann while the
deputies were debating the Repeal Referendum.

"In advance of the difficult referendum ahead of us, members of the Kildare Coalition are concerned that the government will not ask the right question on the ballot paper. What we want is a simple repeal of the 8th Amendment which will give immediate legal certainty and allow for the Oireachtas to legislate for abortion access for women in Ireland. We fully support the Citizens Assembly and the Oireachtas Committee recommendations," said a spokesperson.

"Saving the 8th amendment will not or has not prevented women in Ireland having abortions. 130 women from Kildare (at least that we know of) travelled to Britain last year to access abortion services. What the 8th has done is made it a much more difficult journey for women who have already made that decision, it has made it so that women who access safe abortion pills online are unfairly criminalised, it has made it so that women are having to have later abortions forcing them to have surgical procedures rather than medical ones, made it more costly and made it a more traumatic and lonely experience for those women."

Joe Burke a Newbridge resident, who took part in the demonstration on his 70th birthday said he was “supporting the campaign to repeal the 8th because "in all my years I have witnessed the abhorrent treatment by the state of women in this country."

He said; "They have been treated like second class citizens and it is about time that we show women that we trust them to make choices about their bodies and their lives. The constitution is no place for dictating what a woman should do with her own body; that is between the woman, her family and her doctor. We need to support the decisions they are already making and provide full access to the health care they need, here, in their own country surrounded by their family and friends to support them through what can be a very difficult process for all of the many personal reasons women chose to have an abortion."

Other coalition members from Celbridge, Leixlip and Maynooth travelled to the demo at Dáil Éireann on Wednesday representing the Kildare Coalition. The Kildare Coalition will be campaigning during the referendum and are asking people to support the repeal of the 8th Amendment.

Anyone, who would like to get involved can contact the Kildare Coalition to repeal the 8th by email at
kildare4repeal@gmail.com