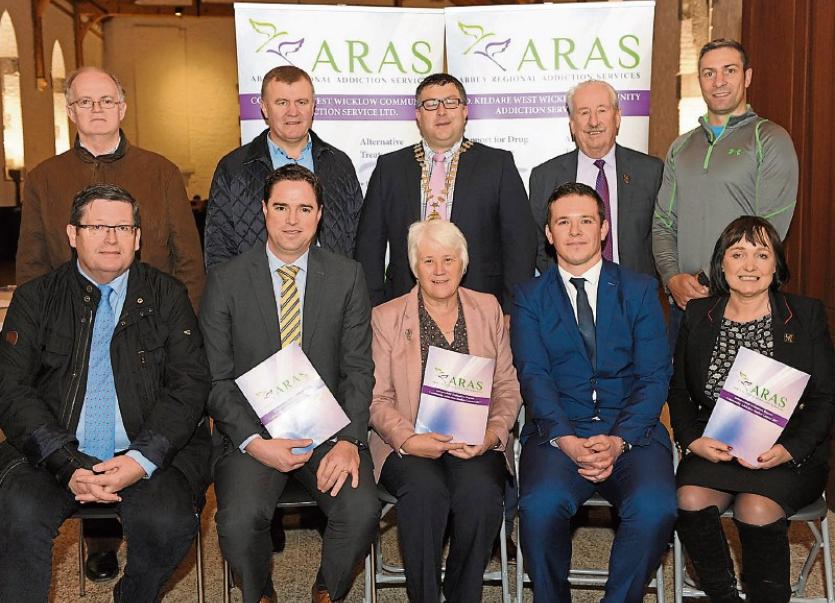 Politicians, supporters and representatives from ARAS with Minister of State, Catherine Byrne and Cllr Kenneth Egan

On the night, two graduates spoke about the impact of completing the course.

Cheryl Moorehouse described how engaging with treatment services at ARAS for the past two years helped her to remain alcohol free, move out of homeless accommodation to her own home and engage with a range of vocational and educational programmes at ARAS, including the community addiction studies course.

Cheryl now works on a voluntary basis for a local charity and she hopes to progress a career working with deaf people in the future.

He congratulated the graduates on behalf of the Board of Directors and welcomed their families.

Manager of ARAS, Tommy Gilson, presented the Minister with a copy of the external evaluation of the ARAS Community Addiction Studies Course.

The course was delivered by Urrus, a training and education centre based in Dublin, who develop and deliver addiction specific training courses.

Funded by the Adobe Foundation Fund, the course was run over 20 weeks, between January and May 2017.

The impact of the course was measured through both qualitative and quantitative methods prior to the course commencement, at the mid-way point, and post completion.

Of the 13 course participants, who received the QQI Level 5 qualification, three progressed to further education to complete a Diploma in Community Drug & Alcohol Work through UCD, with another three service users progressing to participate on a certified Recovery Mentor Training Course, also run through ARAS and supported by Adobe.

She acknowledged the positive contributions they have made to their communities and commended their commitment to recovery.

Cllr Egan spoke of his own recovery journey and highlighted the importance of community based treatment and rehabilitation services and supports for people affected by substance use problems. He congratulated the graduates for their achievements and wished them well in their progression to further education and employment.

ARAS is a local charity that is funded by the Health Service Executive through the South Western Regional Drug and Alcohol Task Force.

ARAS provides a range treatment and rehabilitation supports to individuals and families affected by substance use problems in the region, through their two full time services in Newbridge and Celbridge respectively.