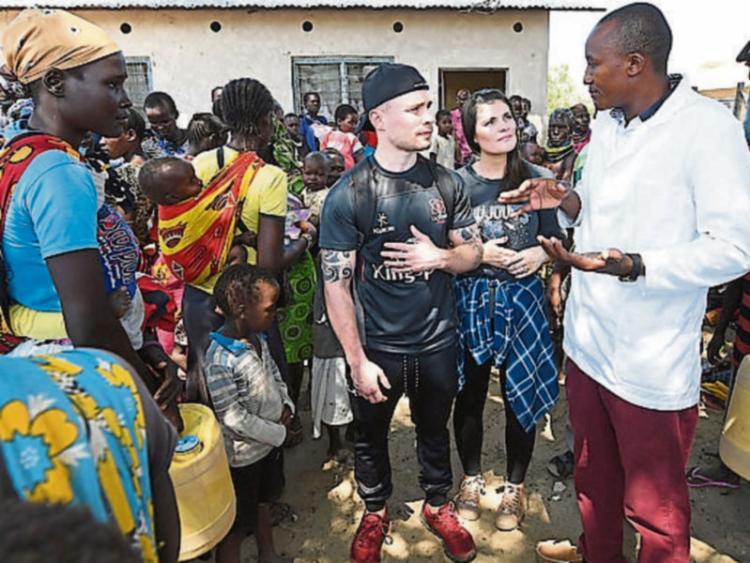 Carl Frampton on his visit

The plea comes as over 26 million people continue to face malnutrition and the threat of famine across South Sudan, Somalia, Kenya and Ethiopia due to prolonged drought.

“I have seen the difference support from Kildare has made on the ground. It is no exaggeration to say that they are having an immediate, practical impact on families throughout East Africa. Our health centres and feeding programmes are saving lives but we need to continue our response and we need the public’s support to do that,” he said.

Trócaire is currently reaching hundreds of thousands of people across the East Africa region with emergency food, water, sanitation and healthcare.

This includes in South Sudan, a country gripped by a brutal civil war where millions of people have fled and Trócaire has been supporting 24,000 people.

The charity has been providing emergency food, water and supplies in the war torn country throughout the food crisis and there has been a significant improvement. Trócaire staff reported that early in the year people were too weak to stand at feeding distributions but after a few months it was visible people had more energy and their severe weight loss had stopped.

As part of the Christmas appeal, former two-weight world champion boxer Carl Frampton recently travelled to Kenya, East Africa, to see first-hand the impactful work being carried out by Trócaire there.

Carl and his wife Christine visited a Trócaire feeding clinic for malnourished children receiving emergency food. He also met with young boxers at Mukuru slum in Nairobi, one of Africa’s largest slums where poverty, disease and violence is rife.

Carl said: "The suffering, the squalor and poverty that so many are enduring is heartbreaking, but then on the other side, there is the great work that is being done.

“It’s massively important to support the Trócaire Christmas appeal. The people of Ireland have shown time and again that they have an amazing affinity for, and solidarity with, people in the developing world who are facing crisis but seeing it first hand, I don’t think you could prepare yourself for something like that.

"It was a short trip to raise awareness of Trócaire’s Christmas appeal, but for us the memories will stick with us for the rest of our lives."

For more on Trócaire or to donate to the Christmas appeal visit www.trocaire.org