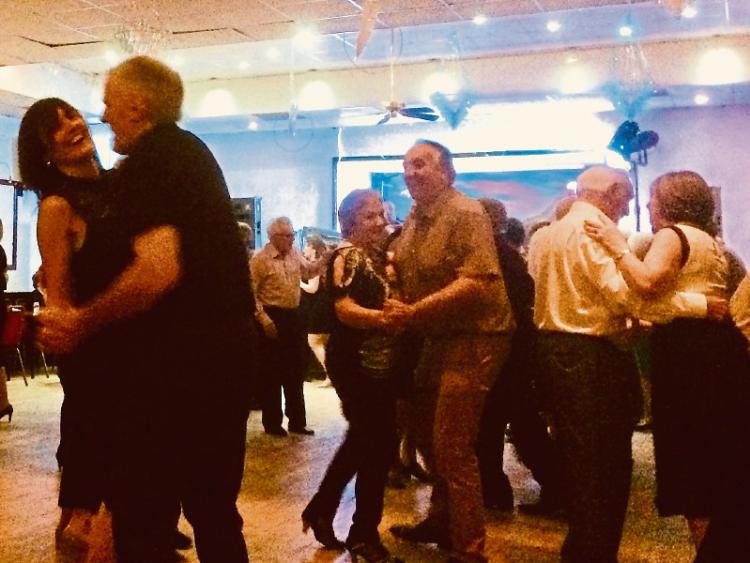 The Ballroom of Romance at Mazenod Social Club in Kilburn

The old town hall in Wimbledon is a Tesco Metro now.

The brickwork remains and the same old mortar holds that same old brickwork together, but the sign over the door is for a supermarket, not a community centre. I was stood to the front of the old building in 2011 beside a man telling me how the old, cold walls leaked warm memories from the London Irish showband era.

Pat Kane left Emily Square in Athy on a bus in 1958. And years later, he watched as they poured into Wimbledon by bus from Southampton to watch Brendan Shine, whom he brought over from Ireland.

“Ye won’t believe me, but they were swinging from the rafters that night,” said Pat.

And then there was the night that Jim Reeves was down to play in The Buffalo in Camden Town. Only Jim didn’t turn up and the crowd started breaking up the joint.

So Billy from ‘Billy and the Northwinds’ said. Billy left Buncrana in 1962. He still dresses in a smart leather jacket and plays with ‘The Northwinds’ in small halls around the city.

Working as a reporter with an Irish newspaper in London, I quickly came to understand that these stories and these characters were part of London’s Irish lexicon.

And the platforms that made those stories were once pillars of London Irish life.

Or the Gresham on the Holloway Road.  And the mecca of them all — The Galtymore on Cricklewood Broadway.

If you spent any time living in London through an era when Joe Dolan and Big Tom blew new life into the Irish social scene, then it’s doubtless you visited one of theses venues.

Probably, you visited all of them.

When I first arrived in 2008, The Galtymore was closing up but its name and the names of the other dance halls continue to speckle the conversation in places were London’s Irish beard is growing grey.

It ’s a scene that dated fast in recent years, and the death nail arrived 18 months ago when The Conway Tree in Burnt Oak ceased to be a regular fixture on Monday nights.

Seamus Moore, aka The JCB man, had been the host until he sounded down the speakers and the scene slipped off into the night.

Then, a few weeks ago when someone mentioned an old hall at the back of Kilburn where people gathered by the hundred to relive the glory days of London’s Irish Showband era.

It sounded like the most improbable underground scene with a most unlikely leader — a man called ‘McGinty.'

“What’s his first name?” I enquired.

So two weeks ago last Monday, I visited where this McGinty reportedly hung out —  the Mazenod Social Club in Kilburn in the city’s northwest.

It was cold and dark, Italy were playing Sweden on the big TV in the front bar, and the RTÉ Nine O’Clock News was running on the small TV in the corner so high you had to crane your neck to see.

I ordered a Guinness, then became aware of the muffled sound of an accordion, and through a creaking door at the back, a hidden world full of reverse spins and outside turns was raging quietly against the falling sands of time.

‘McGinty’ from Kilcormack in County Offaly introduced himself.

“This is the Ballroom of Romance,” he declared, and then championed the half a dozen or so relationships prospering among the clientele that were: “Ex Galty, Ex Buffalo, Ex Forum, and they arrive every Monday by the hundred.”

It’s not an Irish London I have ever known and probably never will.

But I understand it’s the only London some readers will have known.

So hopefully this report will be received well by the masses and with great warmth by those who know the scene best.

Down a quiet back alley, Monday nights are running to the rhythm of TR Dallas.

Wait until I tell Pat Kane!