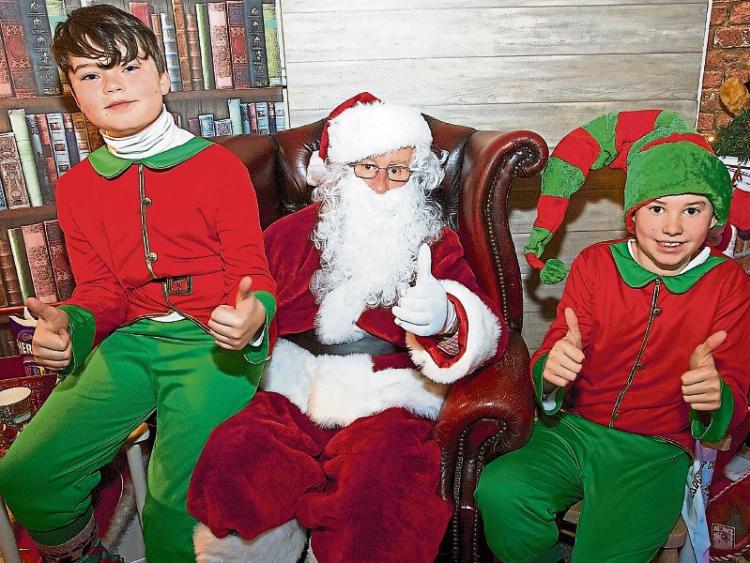 Santa arrived in Naas with helpers, Sean Kelleher (left) and Cian Grainger-Stanley at the turning on of the Christmas lights in Naas, 2017

Here I am banging on about Christmas and Santa yet again. Sorry folks. Last weekend though I came to the realisation that all these Santa experience are just a waste of time and money.

The kids really don’t care about the ‘experience’, all they want is the present. Well, that’s all my two want anyway.

The reason I’m saying this is because we went to see Santa yet again last weekend and it was our best trip yet.

Where were we and how much was it? Well we were in Newbridge and it didn’t cost us a cent.

Our Residents Association have organised a Christmas party for the kids in the estate for the last two years now. It’s held in the function room in Sarsfields and a neighbour dons the red suit and plays Santa. The organising committee kindly supply treats for the kids and Christmas music fills the air from the iPod and speakers, which is also supplied by a neighbour.

There’s no dancing elves. There’s no fancy train. There’s no elves workshop on display. The kids had the best day ever though.

They got jellies, crisps and juice and they got to run around a big hall with their friends from next door. What else would they want?

Seriously, I wish I realised this before, realised that these experiences we’ve been going to are more for us adults rather than the kids.

The Ailesbury Park Santa Experience lasted for two hours. Aidan and Sarah stuffed their little faces with rubbish, danced their proverbial socks off and ran around the hall like lunatics.

Santa arrived half way through the party with a big bag of presents. All the parents bought the gifts. We had a budget of €10 per child, wrapped them and gave them to the organising committee. who brought them up to the party. It’s a great way of doing it because it means your child is actually getting something they like and something that’s appropriate for them. Aidan got a board game and Sarah got a Peppa Pig tea set and they were delighted with them.

For us adults, it was great to sit down and have a cuppa with friends and neighbours. Some of them I’m good friends with and see them all the time. Some I don’t see from one end of the year to the other, so it’s nice to see them. It was also lovely to meet new families who have moved in to the estate since we had the 2016 party.

Yes, our local Santa had a fake beard but that wasn’t a big deal for anyone. Sure half of these places that run Santa Experiences have Santas with fake beards anyway!

He arrived in, sat at the top of the hall, called each child up individually, had a chat with them, gave them their presents and posed for a photo. It was perfect.

I really wish I came to this realisation a long time ago. It would have saved me a fortune on expensive trips to see Santa.

I hope this Ailesbury Park tradition keeps going too. It’s such a lovely idea and a lovely way to get all the families together. I’ve never lived anywhere that had such a tradition before.

And speaking of Santas that don’t cost you anything, I was in Whitewater the other day and Sarah spotted him. She insisted on going to see him and seeing as there was no queue I brought her in to his grotto.

She sat up on his knee, told him she was a good girl and informed him she wanted a shop and a cry baby for Christmas. I took a photo of them, she got a candy cane, a badge and a letter to post to Santa. She was delighted, so there’s another example of keeping it simple.

She didn’t care one bit about anything only seeing Santa.