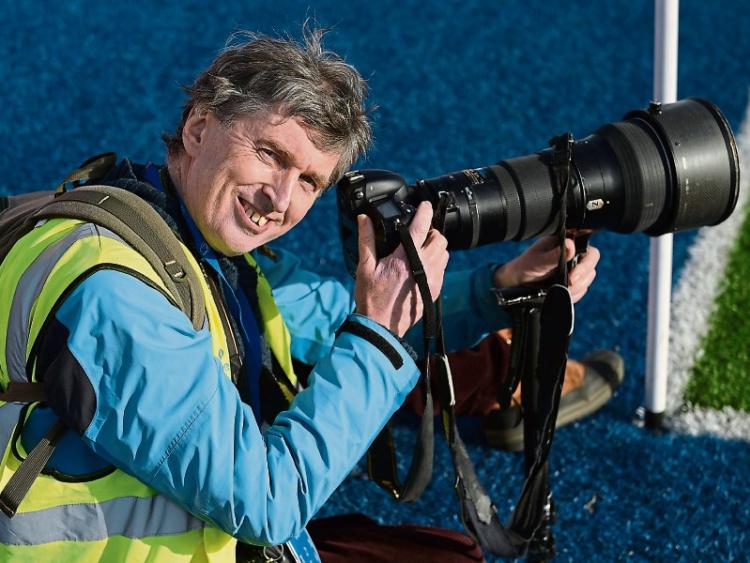 I first heard Adrian Melia had cancer in May. Like any unexpected news, it came as a surprise and it was news laced with sadness because I’d reported on events that Adrian photographed and always found him to be great company.

It was a surprise, too, because he was a constant of Kildare life and like a unit of time, the click of his camera captured the weeks, months and years of local life.

Then last week, his camera finally stopped clicking and it was a strange feeling to receive an email that Adrian Melia had died.

I can only offer a personal glimpse, but the first time I really noticed Adrian Melia was in 1995 when he was reporting on the Provincial Towns Cup semi-final between Naas and Carlow in Old Kilcullen.

He took some eye-catching action portraits, perfectly framed, but there was this one stand-out image of spectators watching the game from the rooftop of the Rosetown club house.

It would be stretching my memory to say he’d a style that managed to capture whatever occasion he was covering but this is what he often managed to do.

I remembering writing a report on an Eric Donovan versus Davy Oliver Joyce amateur boxing match in the National Stadium in 2005/6 and rushing to show people the text in the paper, only for the gaze of my audience to be waylaid by Adrian’s image of the two fighters trading blows the top of the page.

At the time, I reasoned that the picture was a great complement to the writing.

Now when I look at it I see a masterpiece all of its own.

I barely knew Adrian at this point, but I got a message from him later that week saying ‘well done on the report!’

Journalism is a strange world. Colleagues don’t surrender compliments easily and these kind words stick out even now because such moments are a rare kind of wonderful.

I saw Adrian Melia a lot in the National Stadium after that, and I’d always look forward to meeting him.

He had the best inside stories I could never hope to publish for reasons of libel, and he was disarmingly engaging.

A cup of tea and a purple Snack bar from the kiosk, these were some of the best nights on the job.

There were very few people covering the Kildare boxing beat then, and Adrian would be thrust through the ropes, snapping furiously and loading lenses of differing lengths to the nose of his camera like a soldier might a magazine of bullets to a rifle.

He turned up fresh from holidays in the Middle East, one year carrying a paper bag filled with macaroon sweets from the Oman.

I wouldn’t have found the Oman on a map back then, but half the National Stadium were chewing these sweets and in the ring future world champion Andy Lee was knocking out a journeyman called Jason McKay.

He liked a joke and could thread all these lighter moments around the business of taking photographs. A business he took very seriously.

Good sports photography comes with a much lower difficulty rating nowadays than it used to.

Some photographers I’ve met in London hold the button, point the digital camera and then extract the best digital image from the zillion frame-by-frame shots they’ve taken over the course of an hour.

But through the vast majority of his career, Adrian Melia worked with limited film and with a unique style, captured the best of Kildare’s sporting moments over the last three or more decades.

Really, you’d have to go a long long way to find a better documentarian of Kildare life.

From Roseberry to Forenaughts to St Conleths, St Michael’s Boxing Club and on it goes, no field with a set of posts in it, no local hall with a net in it, was ever allowed to fall out of camera shot.

And my abiding image of Adrian Melia is a figure clad in wet gear, sauntering down a sideline somewhere with a long lens camera slung over his shoulder, dispensing easy smiles as well as camera snaps.

He must have taken millions of photographs in the sun, in the rain, in the hail and in wind.

And considering we are only a county of a couple of hundred thousand, then the chances are, if you’ve played anything at any level in Kildare in the last 30 years then Adrian Melia will have captured a moment that meant something to you.

The thing that set him apart was that it meant something to him too.

Robert Mulhern is a London based journalist contracted to RTE's The Documentary on One. To contact our columnist, please email mulhernrobert@hotmail.com