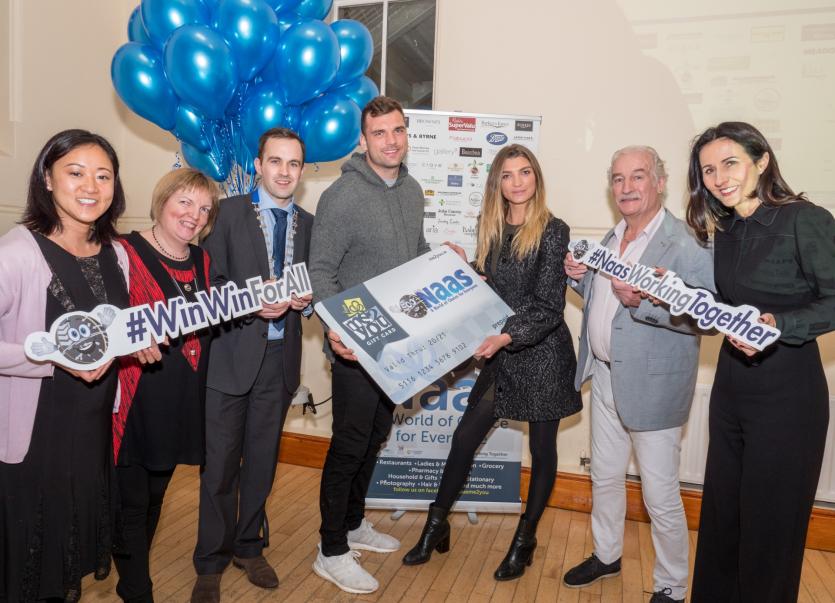 The new gift card scheme launched in Naas in the run up to Christmas is a unique venture.

Voluntary groups in the town have joined forces with the me2you gift card company to create the Naas Gift Card, which was unveiled on Friday night.

The arrangement with a provincial town is the first of its kind in Ireland for me2you.

Alice Fennelly of the Naas Retail Development group, which is assisted by the EU/URBACT, said: ”Naas is showing itself to be ahead of the game.”

The me2you company was decided on as the partner of choice for the Naas gift card because at a preferential commission rate, it represents the fairest deal for Naas retailers, according to Ms. Fennelly.

For shoppers the card offers an “unrivalled choice” of everything from everyday essentials to luxury products. The services include grocery, pharmacy, restaurants, ladies and mens fashion, opticians, hair, beauty, photography, homeware, books and stationery.

So far 62 businesses have said they will take part.

The gift cards range in value from €15 to €500 and are available to buy now from Barker & Jones, Naas Credit Union, Maxol at Dublin road, Swan's on the Green, Rushe's SuperValu and Cross Centra in Hazelmere.

An employer can use the cards to give members of staff either a single or multiple cards within a given tax year as long as the total bonus does not exceed €500.

Employers can buy the cards either directly in large numbers from the me2you gift card company (01 5542000) or cards are available in small self register packs from the aforementioned outlets.

The scheme was driven by Alice Fennelly, a local businessman and a member of the Naas Regeneration Group and the NRDG as well as volunteers.

Financial support has been provided by EU URBACT (which promotes urban development through towns and cities working together).

Ms Fennelly said the gift card scheme is being launched at a positive time and she cites the forthcoming opening of a supermarket in the town, the approval of a large extension to Lawlor's Hotel as well as infrastructural improvements and the construction of more houses as proof of this.

She said the initiative highlights the calibre and choice of retail and restaurants in Naas.

Robin Skelton said the launch is one more step towards “establishing Naas as the shopping experience we know it can be.

“We urge local employers to switch to Naas me2you cards.”