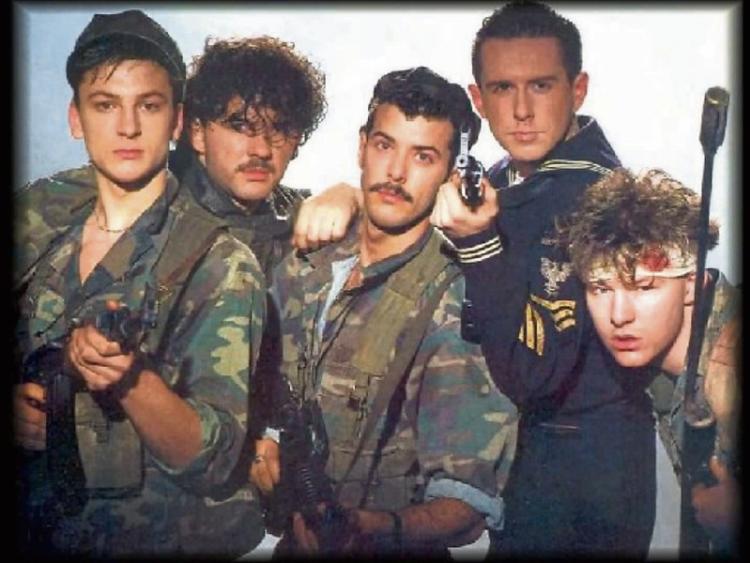 You could hear it in the wind across the Curragh. The sound of 25lb guns pumping out heavy rounds and small 5 inch machine guns spraying bullets in what sounded like the direction of Brownstown.

But it was a training drill for ‘the Leb’. Even though none of us had a notion where ‘the Leb’ was in 1984.

On the news, the reporters were calling the build-up of activity on the Curragh, Operation Acorn with air-support… cue one small jet screaming from the direction of Straffan, across the roof-tops of Sallins and then pulling a long u-turn over Pollardstown Fen.

There was no gunfire, only applause when El Gran Senor and Pat Eddery arrived first past the post to win the Irish Derby in June and on the radio Frankie goes to Hollywood was dialling down the temperature, calling for calm and telling people to Relax.

Hollywood was coming in the form of US President Ronald Reagan too.

He landed into Ballyporeen in Tipperary, the home of his great-great Grandfather Michael Regan and in school the O’Regan’s from Cleevaun were claiming a definite ‘in’ with the White House.

Only an invite from Ronald O’Regan didn’t have quite the same ring to it.

And there was a story too coming out of Charles Choiseul’s mechanic’s yard in Two Mile House and how his great-grandfather was the ganger-man on a road-build in Tipp. There, he’d be timing Ronald’s auld, auld, auld fella on his tea-break.

The year 1984 has since gone down as one of the greatest in pop music with Stevie Wonder, Nik Kershaw, Queen, Cyndi Lauper and on it goes.

But if that really is the case, then why does it feel now that Christy Moore’s Lisdoonvarna was playing on loop?

And who the hell were The Mountain Climbers? I’ve had to Google this but in 1984 their name was splashed across every exposed surface in the town, from the yard doors of McCormacks and Haydens to the green ESB supply boxes.

Everywhere there were posters bearing their name, and above that name an image of four sets of feet fixed into snow boots.

Few knew they were a band from Dublin on a nationwide tour supporting future stars like Aslan and Something Happens.

We just figured they were a group of local lads heading for the North Face of the Eiger in the Swiss Alps.

They would have had a chance because the sticking glue they used to put the posters in place was so strong it outlived the band by about 10-years.

People were no doubt saying Novenas for their safety, but in the hall of Ballycane school, not the Church of Our Lady and St David down the Sallins Road.

The ‘main church’ was dressed up in scaffold then and undergoing significant upgrade work.

Meanwhile, in Ballycane school hall, people were struck with confusion and conflict when it came to the kneeling part of the mass ceremony. Because there was nothing to kneel on! Only cold hard tiles and so parishioners ended up in this torturous half-crouched state of genuflection.

When everyone straightened themselves up, Laurence Ryan was made Bishop of Kildare and Leighlin, sort of, because it wasn’t made official until a few years after that.

And if that and the inception of Naas Local History Group could be considered the start of a new era, then Matt Purcell, the great handball player from Ballymore hit his last world title in Croke Park to mark the end of his, at that level.

In the north of the county, Leixlip were getting ready to welcome the arrival of Gaelic footballer and player of the year - Jack O’Se.

But we didn’t care so much for that, the wrestler Giant Haystacks was a much bigger deal back then.

You only had to look at the size of him on the telly.