Kildare's Dennis Hogan could have a shot at a World title

Robert Mulhern looks the rise of the Kildare boxer 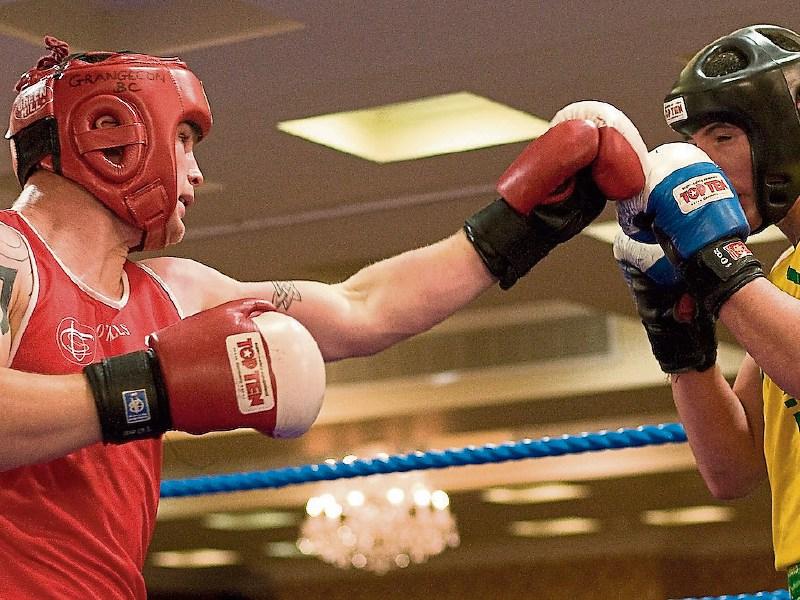 April 2008: Dennis Hogan in red, fighting for Grangecon on his way to his 3-0 win over Danny Tourish of Twinstown, Donegal at the Maynooth Boxing club fight night

Some people reading this piece will know Dennis Hogan very well. Others will be hearing for the first time how a former student of Two Mile House National School, a native of Carnalway and grandson to a once well-known local boxing coach is on the cusp of a really remarkable success.

It’s a success built in recent times, out of sight on the other side of the world in Australia.

Because Dennis Hogan — whose grandfather Paddy Burke coached in Naas boxing club in the old army barracks on the Newbridge Road — is possibly just one fight away from becoming a world boxing champion.

At the same time he has built a career as an accomplished public speaker, so notable he is much in demand from some of Australia’s best-known commercial businesses.

Hogan left Ireland for Australia in 2011. He flew on a one-way ticket with just $800 dollars in his pocket and the dream of becoming a professional fighter.

Since then, it’s been a story of chance, but chance made good by a determination to succeed no matter what.

The chance part of his story is best defined by a half-hour conversation he remembers with an Australian boxing contact in 2008.

The Kildare man was then touring with the Irish amateur team and, three years later, with opportunities evaporating in Ireland, he reached out to that contact again and then travelled to Australia after another half-an-hour conversation and half-promise to become a professional.

That’s six years and 28 professional fights ago, and now Hogan is being granted an audience with the sports top fixers as he plans his final run to a world title shot.

Speaking by phone from Brisbane recently, Hogan fondly remembered a seminal moment in his story that took place in the Ardenode Hotel a long time ago.

It was a Sunday, he was just a teenager and people in the bar of the hotel were giving out cards promoting a then Luton-based boxer with strong Brannockstown connections — Billy Schwer.

Schwer too was on the cusp of great things at the time. But the most striking thing for the teenage Hogan was that Schwer’s people were from just down the road.

“They were talking about him going for a world title,” said Hogan.

“I was thinking to myself, ‘this guy is connected to Brannockstown and it’s beside where I’m from in Carnalway! If he can do, then maybe I could too!’”

For Hogan, the experience was deeply affecting in that people from his parish were achieving great things on the world stage.

But Australia and a 28-fight pro career were a long way away.

Under the watch of Paddy Burke, Hogan started boxing with Naas when he was just eight years old before his grandfather entrusted the Cliffords from Narraghmore with his development.

“I was 12 by then. My grandfather was suffering a bit with his health. The doctors told him that standing in the army barracks on cold nights wasn’t the best thing for his health so he set me up with Peter Clifford.”

The Clifford’s, Peter and Keith and David ‘Rasher’ O’Brien all collected him at different times and drove him to Grangecon Boxing Club, where he would soon fall under the tutorship of coach Seamie Byrne.

And then the Cliffords would drive him all the way back home again.

That’s how it went as Hogan’s progression brought Irish amateur titles and international representation with the Irish team.

In 2009, when Kenny Egan returned from the Beijing Olympics with a silver medal, a picture published in The Star newspaper captured Hogan catching Egan with a punch that covered the Olympian’s face with his glove.

It went viral and Hogan lost that fight. But even bigger forces than Egan would humble the fighter who left the country as the recession in Ireland bit down hard.

The Kildare man could easily have been derailed by immigration checks in Australia and had to learn the sales side of the boxing game that didn’t naturally fit with a demeanour more quiet than outgoing.

Selling himself wasn’t a natural calling but around the same time he ditched drinking, lost weight rapidly and soon he was doing what Billy Schwer did in Luton, but this time in Brisbane — headlining main events and galvanising the support of the immigrant Irish community behind him.

Hogan’s style and amiable manner started making headlines in Australia,but didn’t receive the same attention in Ireland. And he attracted sponsors who would soon see in his story, lessons in preparation and focus that he could impart to their business leaders.

“Doing the talks does feel like a fight sometimes. I get nervous half-an-hour before but it’s different nerves.

“In boxing your career is on the line. Up on stage I want to make sure I’m telling people something that gives them value.”

On this stage, the man from Carnalway now stands more than two stones lighter than when he arrived and he’s discovered he can speak to large audiences almost as well as he can box.

So well, that recently he was the keynote speaker at a business conference held by Australia’s largest electrical goods supplier.

And by now you are more than aware that this is a story or progress building on progress and it will be no surprise to learn that just a couple of weeks ago, Dennis Hogan won the biggest fight of his career against a highly rated opponent from Japan.

The fight was yet another headline night in Brisbane for a Kildare man who remains very much in-tune with Kilcullen and home.

That win, possibly leaves him one fight away from getting a shot at a World title.

And no matter what, this story is already an unprecedented achievement for a Kildare man who dreamed a big dream once upon a time on a quiet Sunday in the Ardenode Hotel.

The first and last time I saw Dennis Hogan was in Kilcullen Boxing Club in 2006.

He called by to spar a few rounds and it was obvious that he was a long way ahead of the rest of us.

But since then he’s travelled a hell of a lot further than we ever could have imagined.