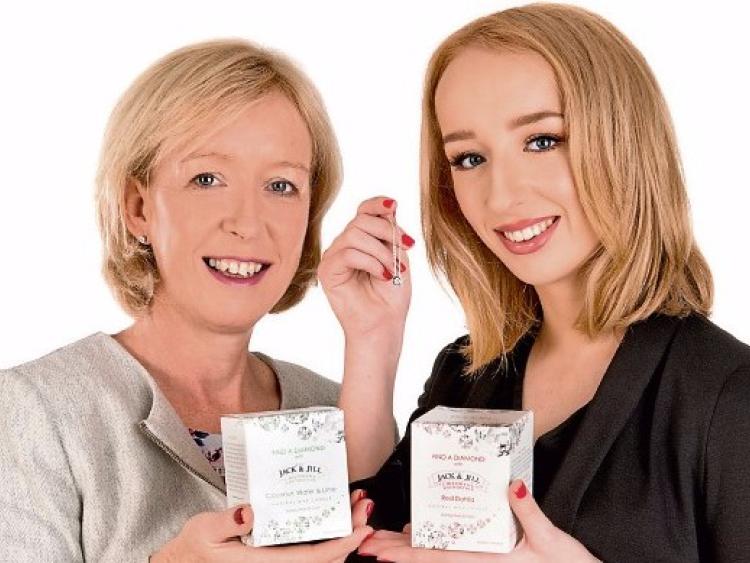 Amy Walsh and her mother Deirdre

Newbridge student, Amy Walsh has designed the Jack & Jill ‘Find a Diamond’ candle, which has been launched for Christmas to make much needed funds for the charity.

There is a sparkling pendant inside every candle and two lucky purchasers will find real diamonds. On sale this month at Avoca Stores nationwide for €19.95, they are made by Celtic Candles and available in two scents – Red Dahlia and Coconut, Water and Lime.

The two real diamonds were donated to the children’s charity by Loyes Diamonds of Baggot Street, Dublin.

Jack & Jill has supported over 2,000 children nationwide with home nursing care and respite hours, including 119 children in Co. Kildare.

It was 20 year old Jack & Jill volunteer and DIT marketing student Amy Walsh from Newbridge who came up with the idea of a diamond in a candle for Jack & Jill.

“I saw something similar online a few years ago, but it wasn’t available in Ireland. So I discussed it with my Mum Deirdre who is fundraising director with Jack & Jill and we developed and localised this idea together for the charity,” she said.

“The first candle we launched in 2015 contained diamond rings which sold out and this year we’ve switched to lovely pendants in each candle which have more appeal to teenagers too.

“The key selling point is that this is a three way gift for less than €20 – in the form of a quality, Irish made candle, each one with a sparkling pendant inside and, most importantly, it is a charity candle that supports home nursing care hours for sick children.  If that wasn’t enough, the extra lottery dimension to the candle in that two of them contain REAL diamonds hopefully gives us the winning formula and we will be sold out in no time. This exciting initiative allows me to put my marketing theory into practice and for a really good cause in Jack & Jill, with every €16 raised through the candles funding 1 hour of home nursing care for a sick child.  I am so proud to be involved.”

The Jack & Jill Children’s Foundation must raise €3.5 million every year to fund its unique home nursing care and respite service which is provided to sick children, from birth to 4 years of age, around the country.

Typically, these are sick children who suffer from severe development delay as a result of brain damage, who may not be able to walk or talk, are tube fed, oxygen dependent and in need of around the clock care.  The Jack & Jill service operates 365 days a year, has no waiting list and mobilizes an army of 1,000 nurses and carers around the country and has done so for 20 years.