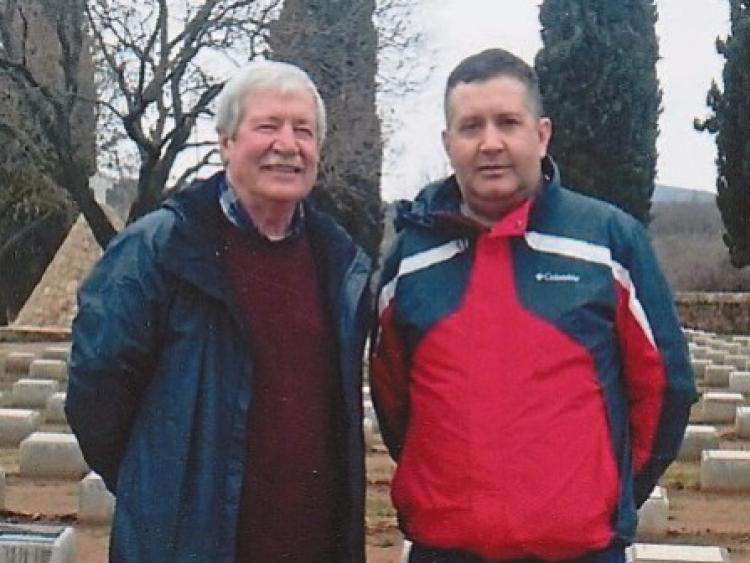 Pat Sherry with his son James at Struma, Thesalonika in Greece

Naas man Pat Sherry has visited the grave of his uncle who died while fighting during World War I.

Anthony Doyle died in Greeceon September 23 1916, after his unit came under machine gun fire. He had joined the 7th Battalion of the Royal Dublin Fusiliers.

Anthony survived the Suvla Bay and Gallipoli Campaign, which was an amphibious landing organised by the British Army as a final attempt to break the deadlock in the Battle of Gallipoli.

This battle was the only significant Ottoman victory of the conflict and is regarded in Turkey as a defining moment in the nation's history. There were 188,000 casualties, including 57,000 deaths.

Anthony was sent to Greece, near the Bulgarian border, and died in action in one of the many Balkans conflicts of the war.

Anthony Doyle was Pat's great uncle and the uncle of Pat's mother (Nellie Doyle, who lived in St Michael's Terrace), and still has many relations in Naas.

He was also related to the Doyle family who formerly lived in the Town Hall in Naas and to former Naas Fire Station Officer Anthony Doyle. The soldier was only 18 when he died and his parents originally came from Shillelagh, Co. Wicklow.

After joining the RDF in Naas he trained at the Curragh.