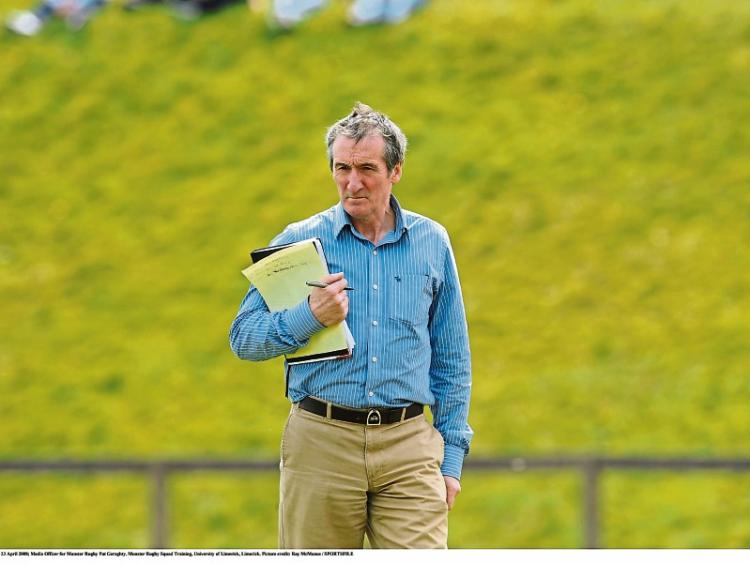 Many tributes were paid to Pat Geraghty following his passing — days before his 63rd birthday — on September19.

Although he was from Ardclough and lived in Wheatfield, Pat was better known as Munster’s Rugby’s media manager, a post he held between 2000 and 2013 and which coincided with Munster’s most successful days on the playing fields of Ireland and across Europe.

He was assigned many tasks in his role with Munster. These included dealing with requests for interviews, arranging player appearances at various events and press conferences as well as keeping the Munster rugby website up to date.

During his time with Munster they won their only two Heineken Cup finals. These were the wins over Biarritz at the Millennium Stadium in Cardiff in 2006 and two years later when they defeated another French side Toulouse at the same venue.

In a statement, Munster Rugby said he was also associated with the province’s successes in the Celtic Cup in 2003 and the League success of 2005 in addition to the Magners League wins of 2009 and 2011.

Pat had also worked as part of the team arranging the London 2012 Summer Olympics.

Former Irish player and Munster legend Donncha O’Callaghan said the relationship between Geraghty and players as one that was fun-filled and one of great love.

O’Callaghan, who spent 17 seasons with Munster in a career which saw him play for the British and Irish Lions, said Pat was held in great respect and described his a friend, a protector and even a father figure to some of the Munster players.

“When Pat Geraghty walked into the Munster dressing room we met a proud Kildare man who had ten years experience behind with our rivals Leinster.”

He added he oozed integrity and his loyalty was beyond question. He said he was trustworthy and his job with Munster became more of an obsession than a job.

O’Callaghan said that while the players sometimes use trophies to measure the extent of their achievements, people like Pat cannot win trophies and his legacy is engraved on the hearts of the players who new him.

O’Callaghan’s long- standing teammate Paul O’Connell said the large number of players who turned out for his funeral was testament to the esteem in which he is held.

He said he was a players man, was highly respected in the game and will be big loss to rugby, and to Munster in particular.

A former Munster hooker, Damien Varley, who worked with Pat between 2008 and 2013 said his death was a great loss to Munster.

“He was someone who was extremely close to all the players. He always had the backs of all the players, I’m sure to the disappointment of some journalists who were renowned for fighting and arguing with him, but that was simply because he looked after us so well and protected us. Some players don’t mind doing the media days and we chat away to the journalists.

“There were times going into them and you would say ‘Pat, what am I supposed to say here ?’ and he would reply ‘just tell them nothing’. We’d laugh and joke about it because inevitably we would all give the same lines and tow the party line. Pat was very good at steering us in what to say, he was almost the PJ Mara that we were exposed to at Munster.”

Former Munster back James Downey said his death brought much sadness to those associated with Munster and he had been a huge part of Munster rugby over the years.

He said: “This is very sad news. Pat was one of the most helpful people in the rugby world. He was an off-field legend in Munster.”

Pat maintained his sporting links with North Kildare by becoming Director of Rugby there after finishing his time with Munster.

His sporting talent also extended to Gaelic football and he played at midfield with Ardclough, making many memorable contributions to championship campaigns.

Gerry Flood of North Kildare RFC recalled that Pat joined the club in1976.

“He was a pretty good player who lined out either at centre or full back and was on the North Kildare team that won a Provincial Towns Plate final in 1979-80.”

On the way to that final success against Dundalk, North Kildare defeated highly rated teams from Skerries and Athy.

Later on recalled Gerry, Pat played on the second and third teams.

He also organised a game between New Zealand players who had moved here and Irish club players.

“He was a great guy who got on with everyone and who got many things done for the club, including fundraising.”

Ronan O’ Gara, in the I rish Examiner, also paid tribute Pat’s loyalty and said that because he had the trust of the dressing room he could impart honesty if and where he saw fit .

And while the media may have seen this as a shield or a barrier to the Munster players, the players themselves saw him as a mentor and an ally.

He also said that time after time Pat displayed an innate sense of timing and good judgement.

The main celebrant at the requiem mass in St Patrick’s Church, Celbridge, was Auxiliary Bishop of Dublin Eamonn Walsh who described Pat as “great fun” adding he had an “impish wit.”

Pat is survived by wife Kathy Sheridan and daughters Sarah and Mary-Kate. His funeral took place to Donacomper Cemetery on September 21.