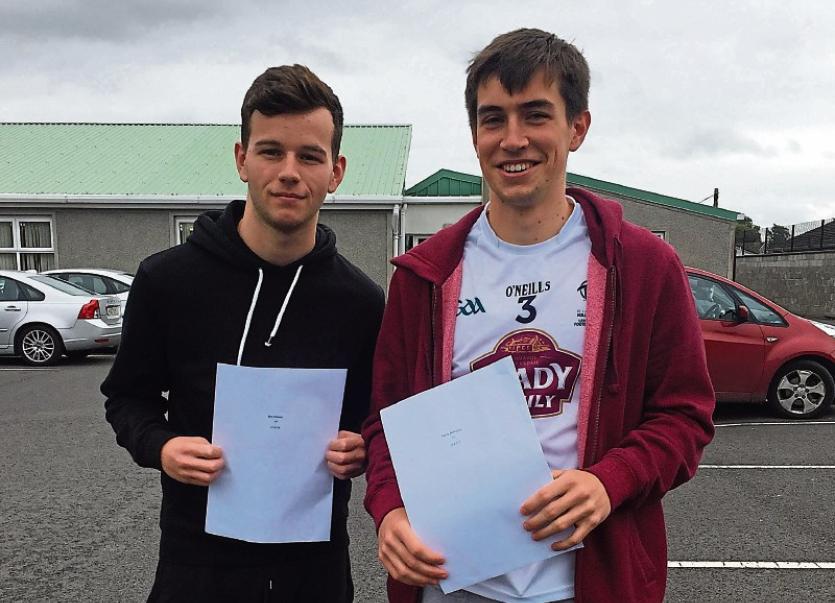 Ben Delaney and Mark Dempsey getting their results from the Patrician Secondary School, Newbridge this morning

There was a whirlwind of emotions at schools in Newbridge this morning as students lined up to collect their Leaving Cert results.

There were tears of joy from students leaving the Holy Family Secondary School at 9am this morning.

Many didn’t open the dreaded envelope until they had left the school.

Beibhinn Moriarty from Kildare was over the moon as she received just over the 540 mark.

“I was sick during the Leaving Cert so I honestly didn’t expect to do well!”, she said with a huge smile across her face.

The CAO first round offers are only around the corner and Beibhinn thinks she will get her first choice.

“I think I got my first choice, accounting and finance in DCU. I’m so excited.”

Beibhinn added that physics was the hardest exam she sat in June.

Beibhinn done higher level maths to get the 25 extra points and didn’t think it was overly hard.

Her friend, Kate O’Neill, still had her envelope sealed.

“I’m really nervous! I don’t want to break down in tears”, said Kate.

Keela Kessie (18) from Kildare Town was very happy with how she did.

“Really well yeah, a lot better than what I thought with some of them.”

She laughed as she said she was shaking walking in this morning.

“I was really nervous!”, she said.

Keela said she was most worried about English.

She also did higher maths and was delighted to have passed, and bagged the extra 25 points.

“My first choice was Trinity but I think I’m after getting either Maynooth or DIT. Lab Technician is kinda what I hope to do.”

Jodie Brown (18) wanted to save opening her results until she got to her car. “I’m going to open them with my mam. She’s actually opening them for me because I don’t want to see them first!”, she laughed.

Principal of Holy Family, Mrs. Angela Ryan, said all the girls had done really well, with a couple of students getting over the 500 mark.

She added that many students will come in bursts throughout the morning, with a lot opting to wait for the online portal to open at midday.

The atmosphere was a little calmer across the road at the Patrician Brothers secondary school.

Ben Delaney (18) from Kildare said he didn’t get his first CAO choice but is still pretty happy.

“I got my second choice. I’ve probably gotten Journalism in DCU.”

“I’m the same as Ben, I don’t think I got my first choice. I think I did enough for science in UCD.”

Alex Mullane (18) from Newbridge said he didn’t get what he wanted but it wasn’t too bad.

“I’ll make the most of it. Happy with what I did.”

Alex thinks he’ll get Economics Law and Politics in DCU.

Nathan Gough (18) from Newbridge was delighted with his results.

“I was full expecting to do a bit worse so I’m delighted.”

Nathan thinks he will get his first choice of Engineering in DIT.