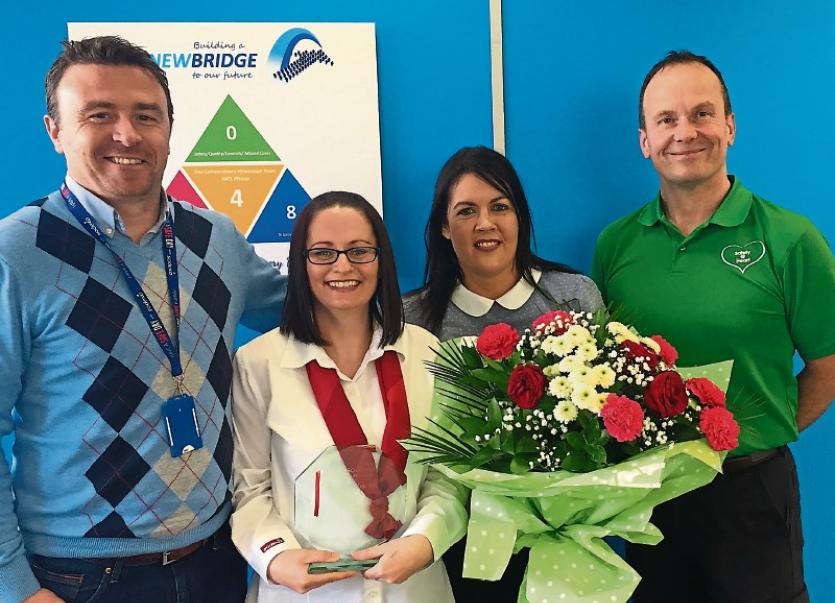 Sinead Corrigan, second left, is congratulated on her win

Sinead Corrigan from Newbridge was recently voted Receptionist of the Year by her employer, catering and facilities services company Sodexo, at its 2017 Service Excellence Awards in London.

Sinead was the only Republic of Ireland employee to win an award at this year’s event which received over 400 nominations in 34 categories submitted on behalf of staff based in Ireland and the UK.

Sinead joined Sodexo in 2010 and is based at Procter & Gamble in Newbridge, where the company manages the staff restaurant and several on-site support services that include reception and helpdesk.

Sinead had been nominated by her line manager Paul Carey, Sodexo’s facilities manager at Procter & Gamble in Newbridge, who said, “Sinead is literally the heartbeat of our reception. She is passionate about providing 5-star service excellence and combines outstanding front of office and customer service delivery skills with a wonderful personal touch.

“The reception area for this very safety conscious site is an extremely busy space with a steady stream of contractors and visitors seeking access every day. Sinead manages their safety briefings, along with a busy switchboard, meeting room schedules and travel bookings and yet always has time to help a colleague in need.”

According to the judges, Sinead won because “she clearly goes above and beyond the call of duty in delivering a first-class service to everyone she meets at the front desk. Her customer service standards are second to none and her actions in supporting and driving the safety culture on-site are exemplary. She has made herself a pivotal part of the Sodexo and P&G operations on site.”

Sinead said, “To be honest, I was very flattered to be nominated in the first place and then to hear I was picked as a finalist, I couldn’t believe it as I knew there was a lot of competition for these Awards!”

The awards ceremony was at Ascot racecourse in London but at the last minute, Sinead was unable to travel. “I couldn’t attend the award ceremony at Ascot because my little two-year-old boy fell sick, so I was at home when Paul Carey rang to say I had won.  My husband, Dad and sister were all in the house when the call came through so there were a few happy screams and cheers to say the least!”

Sodexo arranged for the trophy to be sent to Newbridge where her colleagues organised a presentation at which she also received flowers and chocolates from both Sodexo and P&G. “The feedback from my colleagues and P&G was just amazing.  I was very humbled by the compliments and best wishes. I love this job and the fact that no day is ever the same. I work with a great group of people and I love the daily interaction with everyone who passes through the reception.”