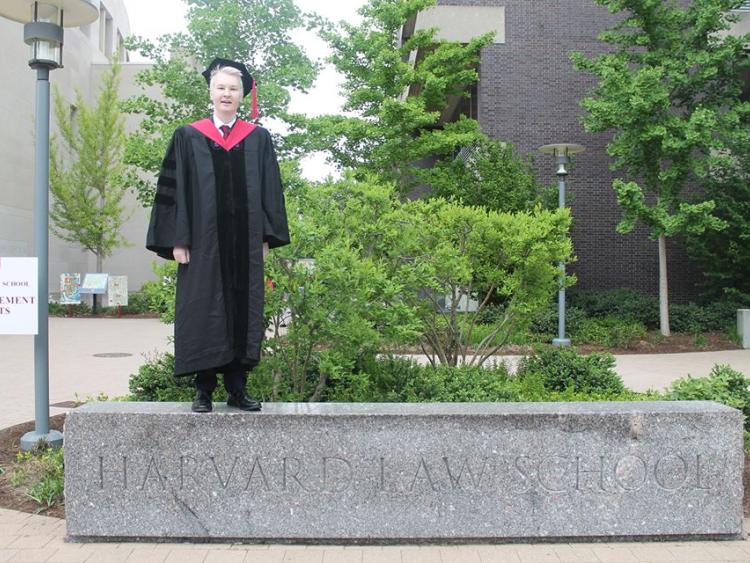 An Eadestown man has achieved a Masters in Law from Harvard Law School, despite an ongoing tough battle with cancer.

Michael Mullan graduated from one of America’s most prestigious institutions in Massachusetts, Harvard, on Thursday May 25.

His girlfriend, Mel Murphy said: “Since going back to law school in August he had a tough year, so I just can’t believe he graduated, he was just so determined. And we are all beyond proud”.

The 25-year-old has fought cancer twice.

He had neuroblastoma as a baby, then renal cell cancer in 2013 while studying at Trinity College in Dublin.

He graduated with an honors degree, and was then accepted into Harvard Law School.

He moved over to the US with his girlfriend of nearly nine years and family in the Summer of 2015.

Since November 2015, he has been fighting metastasized renal cell cancer, and is still battling through.

Treatment isn’t available in Ireland so he is attending Dana–Farber Cancer Institute in Boston for as long as needed.

Michael (better known as Mick) is on targeted chemotherapy since October and has had six rounds of radiation. Before that, he was on immunotherapy.

The son of Patrick and Patricia Mullan of Eadestown, Mick attended Rathmore National School and Naas CBS, and played GAA for the local club.

He has two brothers, Ciaran and Dermot. Dermot and his wife Steph lived in New York and used to get the bus up nearly every weekend to visit.

In February 2016, the community of Eadestown rallied behind Mick and organised a ‘Run for the Hills’ fundraiser to raise money for his treatment, which was a huge success.

“It wasn’t an easy year for him but he loved his classes and was so interested in it and determined! And he got an Honour which is the highest grade in his thesis, and in many other classes too”, Mel added.

Mick’s interests are disability law and criminal law. He plans to do research with some Harvard professors, and will go on to do a PHD this year.