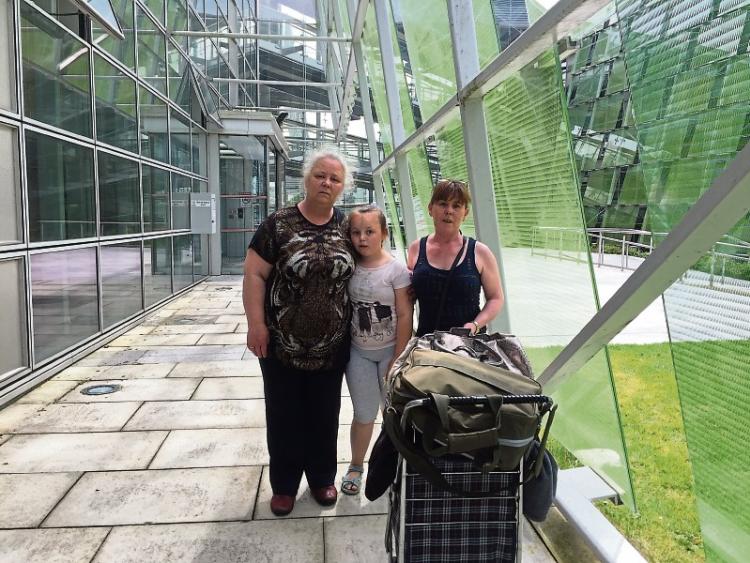 Eileen Doran, left, and her daughter Savannah with Aisling Merriman of People Before Profit.

A homeless mother and her daughter have spent the last five nights in Naas hotels, organised and paid for by homeless charities, despite approaching Kildare County Council for help.

The Leinster Leader has been following the case of Eileen Doran and her daughter Savannah  who have been homeless since last Friday after relations broke down between Ms Doran and a family member they were staying with in Sallins.

Ms Doran says she is not in a position to rely on other family members. Last Friday, when she first became homeless, she refused to leave the vicinity of Aras Chill Dara until something was done for her.

She has, in the past, had a local authority house in Prosperous, but she says it was damaged in an arson attack. She confirmed that she is entitled to rent allowance, but a shortage of available properties means that this is not currently an option for her.

Having stayed outside Aras Chill Dara for much of the day on Friday, security at Kildare County Council contacted the Gardai to remove her.

“In fairness the Gardai were very good to me,” she told the Leinster Leader. “We weren’t giving any trouble.” She and her daughter Savannah were brought to Naas Garda Station where gardaí rang around trying to organise emergency accommodation for them for that night.

They spent the weekend in Lawlor’s Hotel in Naas, paid for by the Peter McVerry Trust. And they spent Monday and Tuesday night in the Maudlins Hotel, organised by the St Vincent de Paul.

Eileen says that she was informed earlier today that Kildare County Council will not be providing her with accommodation and instructed her to stay with another family member. "But I’ve told them that I don’t speak to her,” Ms Doran says.

This afternoon she is meeting with the Mercy Law Resource Centre, a Dublin-based independent law centre which provides free legal advice and representation to people who are homeless or at risk of becoming homeless.

“I hope they can resolve the situation,” she said. “But I honestly don’t know how they will manage to do that.”

Ms Doran said that at the Housing Department of Kildare County Council she had encountered others in dire straits. “One older man had spent 41 nights in his vehicle, and there was also a young woman, a few weeks from giving birth, homeless.”

She acknowledged that Kildare County Council simply didn’t have enough houses to accommodate everyone, but remarked: “They should have places. They’ve been given the resources to do this. There are houses boarded up, shut up and not being lived in all over County Kildare.”

Aisling Merriman of People Before Profit has been working to assist Ms Doran. “This is the problem that’s been growing. There just aren’t enough houses being built. And the Public Private Partnerships are not working,” Ms Merriman said.