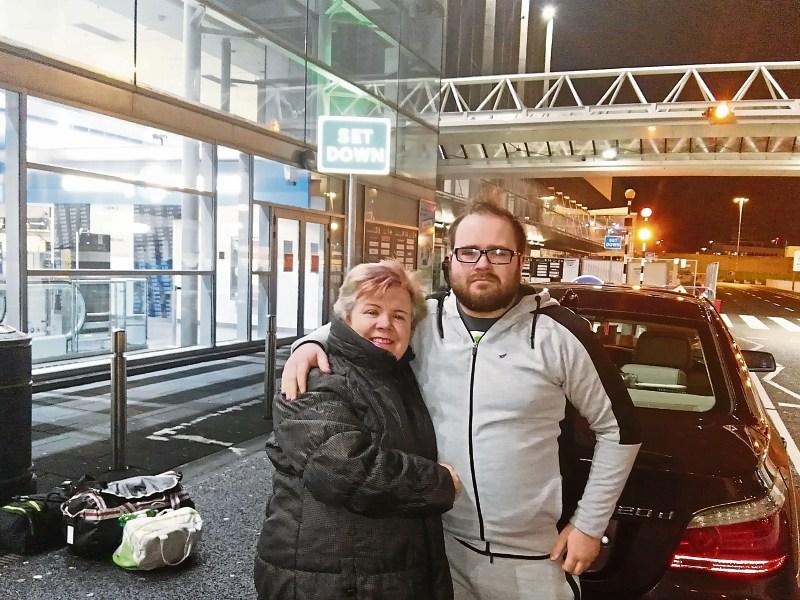 Patricia and her son Mitchell Ryan

Mitchell Ryan, the 22 year old son of Monasterevin woman, Patricia Ryan has written a hard hitting letter to the Minister for Health in the wake of the news that a life changing drug is to be pulled for Alpha-1 lung sufferers.

Mitchell, who himself is a carrier of the condition and currently lives in China, penned the letter recently after the news emerged that the drug will no longer be freely available.

The HSE recently made the decision not to fund the drug Repreeza, a medical treatment that aids those who are suffering from the Alpha-1 lung condition. There are currently 17 people in Ireland who are receiving the drug to treat the condition, but the fact that it costs €100,000 a year per patient has led to the HSE withdrawing their funding of the programme.

The Alpha-1 Foundation have met with the HSE in recent days to protest against their decision to withdraw funding for the drug, but Health Minister Simon Harris has not yet bowed to the pressure from the group.

Patricia Ryan  who ran as a candidate in the last General Election,  said her son is a carrier and is raising awareness of her son's letter since hearing that the HSE are cutting funding for what he describes as a life-changing drug.

"We are still waiting on a reply from the Minister," said Patricia.

"The condition is like a genetic emphysema - it effects the liver and the lungs. Mitchell is a carrier but there are 17 people here with the full blown condition."

In his letter to Minister Harris Mitchell Ryan outlines the continued need for the drug as follows:

It has been brought to my attention that more than 20 people in Ireland who have severe Alpha-1 lung disease are facing the loss of life-changing augmentation therapy within weeks following its rejection by the Health Service Executive (HSE).  The patients, who have genetic emphysema, are due to see their use of the augmentation therapy marketed in Ireland as Respreeza – now provided through a compassionate-use program – end in a number of weeks, the deadline set by the manufacturer, CSL Behring.

Some Alphas in Ireland have been on the treatment for up to a decade, and fear a rapid deterioration of their condition if it is no longer available. This is upsetting news.

An application to receive the treatment, which costs more than 100,000 euros per patient, was rejected by the HSE drugs group. The drug is the only specific treatment for Alpha-1 lung disease. The Irish Alpha One Foundation says the treatment has been “life-changing” for patients. It says the data supports the cost-effectiveness of the drug and its “clear and persistent treatment benefit” leading to greater life expectancy and a reduced need for lung transplantation. Now surely this treatment is cheaper than having to go through a number of transplants, which will in some cases be the sad truth.

The NCPE estimated it would cost 37 million euros over five years to provide Respreeza to affected patients. Now i know that seems like a lot of money, however it IS life changing treatment and these people need it. Alpha's are terrified of losing this treatment and so am I.

I am asking you to review the case and perhaps help the people that will suffer if this drug is not available.

I will be awaiting a reply from you, hopefully soon.

The HSE were contacted by the Leader and have yet to comment.