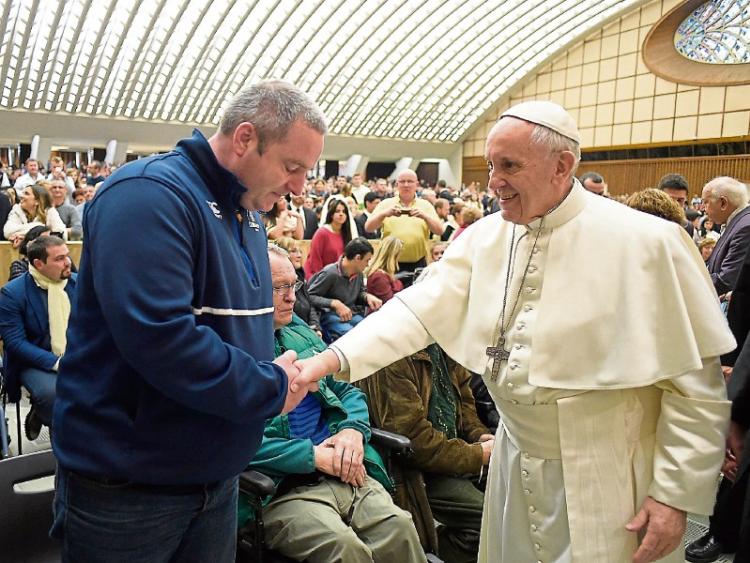 “It was quite emotional,” said Kildare rugby fan, James Jones, of his meeting with Pope Francis this month.

James, a long time member of MU Barnhall rugby club, was accompanying a group of people with special needs to Italy for the Italy v Ireland rugby international in Rome.

James spoke a little Italian with the Pope, who was speaking both Spanish and Italian, during the visit. “I introduced myself in Italian,” said James, who shook hands with Pope Francis.

Speaking after MU Barnhall's first team game with Greystones at the weekend, he said: “It was all a bit of a blur.”

It was a great experience for the people in his group, all of whom received a Papal blessing and a set or rosary beads.

His time in the immediate presence of the Pope, during which he wore the Leinster jersey, was about a minute and a half. “I am not overly religious but it was a surreal experience. I was very happy for the people in our group. I was very proud to be there.”

Overly religious he may not be, but in his late teens, he did some missionary work in Ethiopia.

Now, he told the Leader, “Rugby is my religion.”

He has been with MU Barnhall for 16 years. Having played for the club at one point, he now coaches at U9 and U16 level and for the disability tag team, Barnhall Buffaloes.

For the last two years he has been on the MU Barnhall executive.

As a job coach with Cheeverstown, he helps people to get into supported employment.