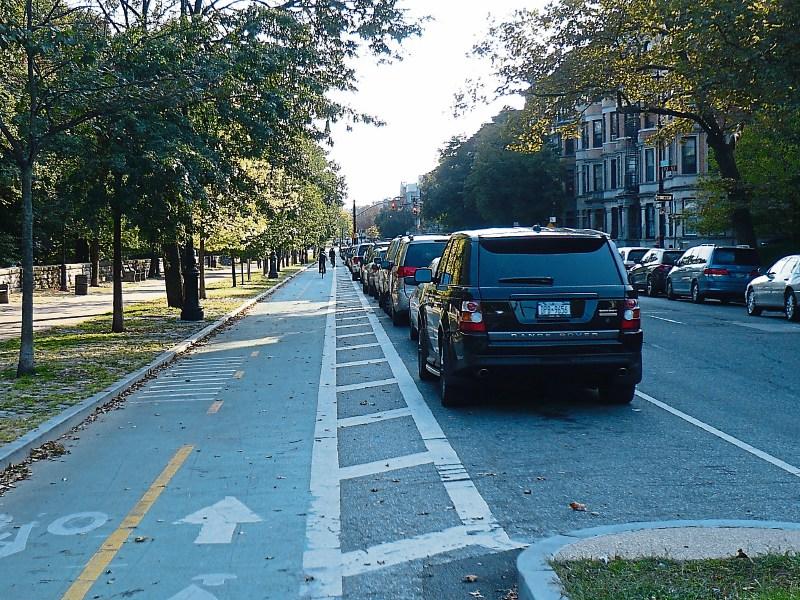 A New York City 'buffered' cycling lane, which preserves car-parking. This kind of system would work well on the Kilcullen Road, Naas

Reading about the concerns of Larry Swan and Pat Goulding it is impossible not to be sympathetic.

Both gentlemen run fine businesses which add to the character and vibrancy of Naas. Anybody who likes great food and great coffee likes Swans.

And Gouldings have been in my good books ever since I went in there to buy a set of screwdrivers a couple of years ago. They explained that I’d really only ever need three instead of a set. As a customer who is clueless in all things DIY, it would have been easy to “upsell” me but they did the opposite. That’s the kind of decency you get in family-run stores and is just one reason why they enrich their towns they trade in.

It’s in all of our interests that these shops thrive for generations to come.

Their chief fear concerns the proposed removal of parking spaces from outside their premises to make way for a cycling lane.

As a cyclist, I’m keen for improved and safer cycling routes.

I also think that the era of car transport for the masses is on the wane. There are simply too many of us living in urban areas such as Naas for everybody to be drive everywhere - while expecting to park right outside our destination.

However, this is a process and it would be ham-fisted to try and force changes through that could hamper businesses such as Swans and Gouldings.

It would also be unnecessary, because there is an obvious way in which you can put down cycling lanes while preserving a lot of car-parking spaces.

"Buffered cycling lanes" were introduced in a lot of New York to great success in recent years. They offer parallel car parking - between the cycling lane and the regular traffic.

So as well as allowing people to park, the cars also give a protective barrier to cyclists, separating them from the traffic. A wide road such as the Kilcullen Road offers the scope for such a layout.

The greatest drawback I can imagine is that cars turning off the main road onto, say for example, Patrician Avenue or even into the Garda Station might not notice the cyclists behind the row of parked cars and swing into them. You would have to stop the parking within a certain distance of turn-offs to lessen this risk.

But, essentially, the message is that there is a potential for cyclists and motorists to co-exist in peace and prosperity!

Incidentally, when I got my screwdrivers from Goulding I cycled up there. And I’ve cycled to Swan’s in the past for tea and food a few times. If there were safe cycling lanes going past Swans and Goudlings, perhaps more people would travel there by bike and give their businesses a lift.

This can and should be done without impacting greatly on the number of car-parking spaces available outside.

Change - if it’s done right - could bring more of an opportunity than a threat.