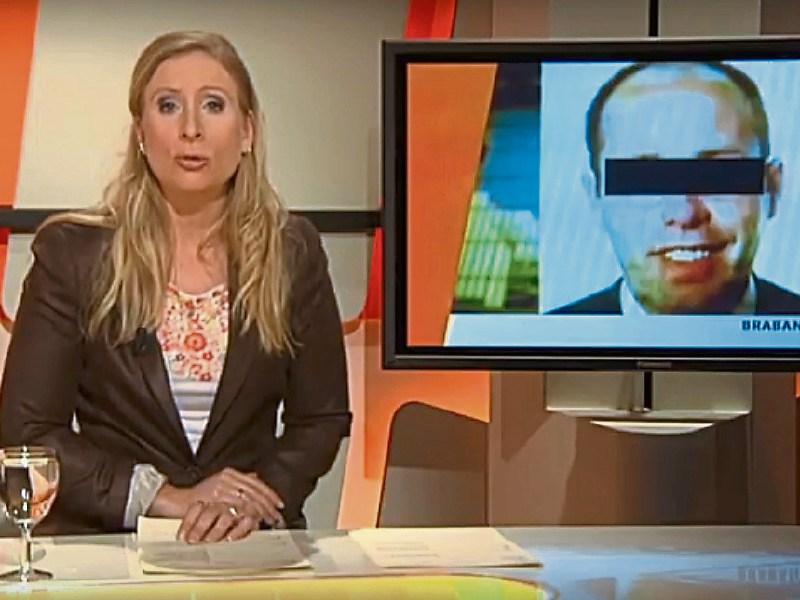 A still from a Dutch TV report on Anthonie Van Wilderoden

The bizarre life of a Dutch man who lived near Blessington and made several appearances at Naas District Court is set to be made into a movie.

The colourful past of a man who goes by the name Anthonie Van Wilderoden and who appeared before Naas District Court on a number of occasions has emerged after he was jailed last week for 18 months.

And it’s now being made into a movie.

Anthonie Van Wilderoden (44), with an address in Ballyknockan, Vallymount, Blessington, was charged in 2014 with stealing stable mats from the Tri shop on the Curragh in August of that year.

On January 13 of this year, Mr Van Wilderoden was sentenced after being convicted of a running a shoplifting enterprise.

He claimed he had built up a heavy debt and his estranged wife had gone to America with his children leaving him with no way to support himself.

In October of 2015, Naas District Court heard that the defendant had a number of previous convictions dating back some years to various courts in the Netherlands and Belgium - the last of which was in 2007.

However what Naas District Court did not hear was details like the fact that he had been in a Dutch witness protection plan after he claimed to be able to give evidence against the Hells Angels, and that he had almost managed to marry into nobility having restyled himself as the Spanish Duke of Aragon and changed his name from De Bruin to Van Wilderoden.

Naas District Court was told in October 2014 that Mr. Van Wilderoden had worked in Ireland as a business consultant to a call centre for a healthcare company, but lost that job when the company went bankrupt.

More recently, Dublin Circuit Criminal Court heard evidence that he now sells edible insects having set up a business called ‘Eddiebug’ with the help of a government loan and that he is also the director of a chocolate making company in Wicklow.

He said he began the shoplifting enterprise because had built up heavy debt and his estranged wife had gone to America with his children leaving him with no way to support himself.

The court heard he would put up advertisements on Donedeal selling household products and would then steal these products from shops depending on the interest in the ad. None of the buyers knew the goods were stolen.

Van Wilderoden used a modified baby's pram to steal items from Arnotts, Curries and Harvey Norman including a Nespresso coffee machine, crockery sets, a vacuum cleaner and an electric blanket.

He was caught and charged in 2015 but was arrested again shortly afterwards for stealing a €900 Jimmy Choo handbag from Brown Thomas. Van Wilderoden claimed this was intended to be a mother's day present and wasn't stolen to order.

Mr Van Wilderoden pleaded guilty to 10 sample counts of theft from the four stores between December 2014 and March 2015. He also admitted to possession of a specially modified pram and possession of three stolen gold plated mirrors.

In the Dublin Circuit Criminal Court, Judge Cormac Quinn imposed a sentence of two years. He said he was suspending the last six months because Wileroden is a foreign national.

Garda Michael Moran told prosecuting counsel Pieter Le Vert BL that he got a call from a security guard at Arnotts, Henry Street who became suspicious when he saw Van Wilderoden wheeling around a pram with no baby in it.

The guard stopped the accused and found crockery sets and a coffee maker inside. The pram had been modified with bungee cords to hold down the goods.

Van Wilderoden was arrested and admitted taking the goods but said they were presents for his wife's birthday. He allowed gardaí search his car where they found goods stolen from other stores such as a high-end food mixer and a broadband modem.

Gardaí also found two pages with goods listed on it. Van Wilderoden admitted this was a “shopping list” which he used to keep track of what to steal. He admitted he put the ads online and stole the goods to order.

He was released on bail and two months later was caught stealing the handbag from Brown Thomas. On this occasion gardaí searched his house and found three stolen mirrors.

Mr Van Wilderoden was again released on bail and later entered an early guilty plea. However, he then fled to Belgium before his sentence date. He was arrested on a European Arrest Warrant and returned to Ireland in November 2016.

He has 19 previous convictions from Ireland, the Netherlands and Belgium including fraud, forgery, theft and embezzlement.

The defendant said he set up his businesses with his wife using loans from his wealthy father-in-law. He said he owed money to this person as well as lending institutions and a loan shark.

He received an insurance payout of €155,000 resulting from a botched surgery which caused him to lose a kidney. He said he used this money to repay his father-in-law.

Defence counsel Sean Rafter BL said Van Wilderoden was sexually abused as a child and became a male prostitute as a teen.

He said he saved the money from this to set up his first business but that he was “a person who is totally incapable of handling money.”

Counsel said Van Wilderoden had bought a plane ticket back to the Netherlands and if he was given a suspended sentence he was willing to promise not to return to Ireland.

Back in October 2014 when he appeared at Naas District Court, a Probation Report was ordered by Judge Desmond Zaidan on the defendant.

That report assessed that he is at some risk of reoffending and suggested that he would need to work on what it called his “impulse management”.

When he’s in a bind, the court heard, he tries to get out of it by doing things, like stealing, which only makes it harder for him and everyone else around him.

It’s a long term difficulty that he’s had but his solicitor felt that the Probation Report had highlighted to his client that his problems could be addressed and managed.

Judge Zaidan noted that the defendant had paid back the value of the goods he stole, and his difficult history, but felt that a marker needed to be put down before he fined the defendant €350 and sentenced him to 14 days in prison.

Dutch media has identified the defendant as a native of the town of Barneveld, which is in the central eastern part of the country, 60kms from Amsterdam.

Described by his estranged wife as “a pathological liar”, the Dutchman claimed that he was born in 1972 and had an unstable childhood. His parents, he said, split up when he was a child.

Dutch journalist Jos Verkuijlen of broadcaster Omroep Brabant has compared Mr Wilderoden to Leonardo Di Caprio’s character in the film ‘Catch me if you can’.

“Except that Anthonie keeps getting caught!” he joked.

The Irish Times reports that he claimed that he was kidnapped by his father. He also said he was sexually abused and that he became a male prostitute at 15.

Convicted first in 1997, he was jailed later for fraud, theft, embezzlement and forgery. In 2005, he pretended to be a millionaire and conned top-range restaurants and a helicopter rental company.

Later, he came into contact with a notorious branch of a Hell’s Angels motorcycle gang called The Nomads, who controlled much of Holland’s drug trafficking and prostitution, according to Mr Verkuijlen.

Mr De Bruin, as Mr Wilderoden was then known, told Dutch police he could help solve a 2004 murder case, saying he had spoken to a fellow prisoner while in jail, about the matter.

That got him into the Netherlands’ witness protection programme for a while before it was discovered he had fabricated most of what he claimed.

He was still kept in the witness protection for fear of retaliation and kept his head down for the next few years until he emerged with a different identity, that of the Spanish Duke of Aragon, Anthonie Van Wilderode d’Aragon, all set to wed Tara Elliot, the beautiful daughter of a wealthy Scottish-Irish aristocrat.

Gossip In the Netherlands in 2010 was that it was expected to be almost as big a wedding as that of the king eight years before.

Due to be held in a tiny village in the south of the Netherlands, there were hundreds of bouquets ordered, musicians and a celebrity chef - all at a former royal residence, the Palace Het Loo in Apeldoorn.

But just before the wedding, suppliers started looking to get paid and the police were called.

Although shocked, the bride had already married Van Wilderoden in a civil ceremony in Belgium. He was returned to jail for a further nine months from a previous sentence - and a year later got another year in jail for wedding fraud.

The journalist Jos Verkuijlen covered the trial and reported that the defendant was “very polite and very believable. I can understand how he fooled a noble family”.

Notwithstanding the fraud, Ms Elliot stayed married to the defendant - at least until more recent times and appeared prominently in the media in relation to the insect food business some years ago.

She is quoted in the Irish Times as saying: “We are very much estranged and I will be granted a divorce very soon, within a couple of months. He is a pathological liar.

“It would be foolish to believe what he told yourself, or the courts or anyone. I’m just another one of this victims and he deserves to get a lot longer than he got.”

And she says he still owes her father a large sum of money.

The film of his life, titled Basilica, is currently in production. “It should be a great movie,” said Mr Verkuijlen, “better than Catch Me If You Can.”