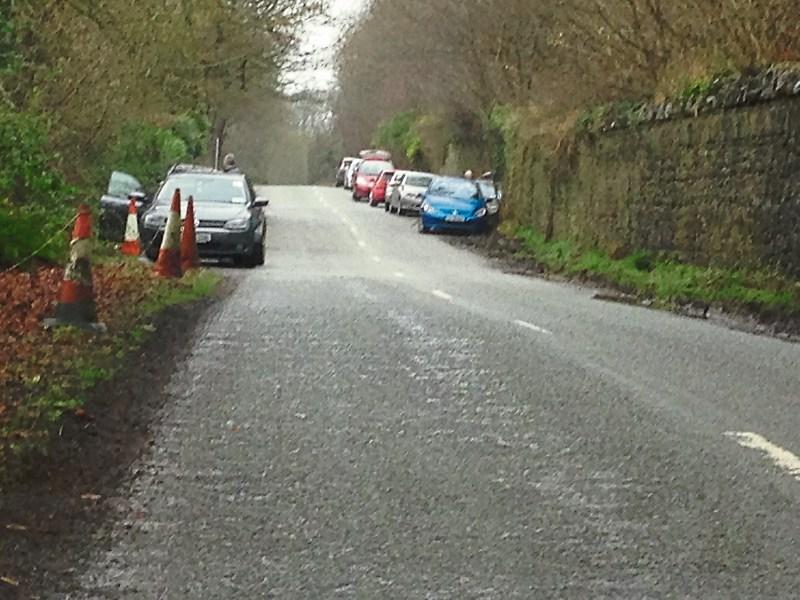 Cars parked on the road between Staplestown Cross and Ballagh Cross

There is concern that users of Donadea Forest Park who park at the side gate to avoid using the main entrance to the park will cause a dangerous traffic hazard.

A statement by Coilte which runs the forest park has backed a call from local woman Linda Maguire who believes that “it’s only a matter of time before somebody is killed”.

Coilte charges €5 per car entering the forest park through the main gate.

This is a standard charge applied to all such facilities run by the semi-state body.

They say it is meant “to help to defray the running and maintenance costs of the park. A €5 all-day parking charge has been in place for the past several years”.

There are a number of other entrances to Donade through the wall of the estate.

The best known and most used of these is the large wooden gate on the road between Staplestown Cross and Ballagh Cross, mainly because there is room for a small number of cars to park there.

However, according to Ms Maguire who lives a short distance away, the build up of cars on the side of the road that it's “only a matter of time before somebody gets killed, or worse, a child. That would be the worst case scenario.

“And they’re tearing up the side of the road where they’re parking.”

However, she did feel that Coilte bears at least some responsibility for the situation.

She explained that the only way to access the paid-for entrance is to have exact change for the barrier at the entrance.

She herself has purchased a €40 annual ticket which enables entry to all of Coilte’s Forest Parks nationwide.

In a statement to the Leinster Leader, Coilte noted that Donadea Forest Park “is one of the most popular destinations for outdoor recreation in the Kildare and greater Dublin area.”

The statement added that in 2013, in response to requests from our visitors, Coillte undertook a major upgrade to make the trails ‘buggy-friendly’.

“As with other forest parks, Coillte apply a car-parking charge to help to defray the running and maintenance costs of the park. A €5 all-day parking charge has been in place for the past several years. There are a small number of people who decide not to use the car-park at the forest park and instead park along the verges on approach.

“Coillte have worked with the local authority and the Gardaí around improvements to the entrance that encourage people not to park along approach roads.”

And they asked visitors to cooperate with them: “Coillte would ask visitors to the park not to park in an unsafe manner along approach roads.

“All of the car-parking fees generated are used on improving the recreation trails, picnic sites, signage and other services available to visitors to the forest.”

Donadea is almost 600 acres of mixed woodland with about 60% broadleaf and 40% conifer.

Donadea Castle and estate was the old home of the Aylmer family up until 1935.