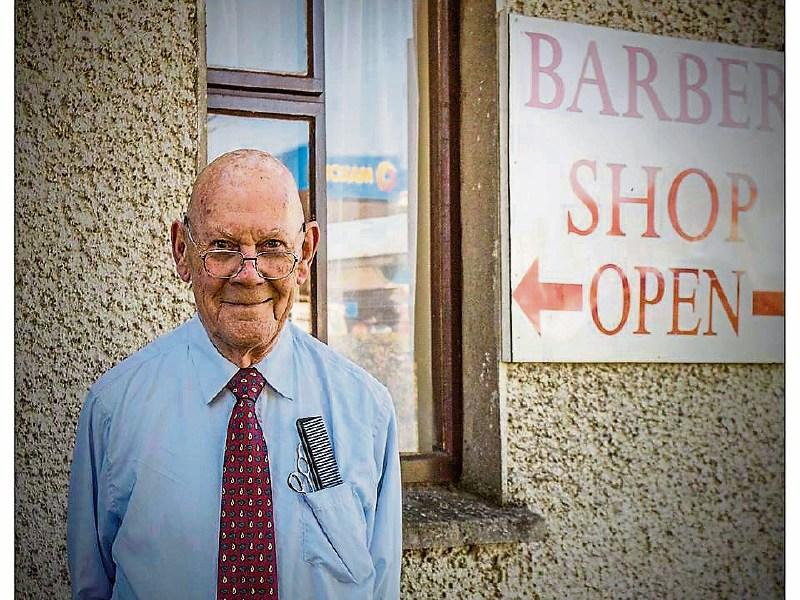 NAAS has lost another great character following the death of Noel Delaney.

Like most people I knew Noel from his barber shop that used to be off Poplar Square. It was an institution but, then, so was Noel.

This shop was a hub of stories, conflicting views and deadly wit. Behind the door of Delaney’s and between snips of the scissors you could feel the pulse of the town. Its rhythm. Often, Noel set that rhythm, conducting the conversations with an electric clippers in one hand and a comb in the other.

I couldn’t hope to write the definitive piece on a life so rich and varied. I was only treated to glimpses every time I visited for a trim.

I remember one afternoon waiting for a haircut from Noel in ’98 after Kildare had beaten Kerry in the All-Ireland semi-final.

Inside, everyone was talking about our chances against Galway in the final and then someone asked Noel what he thought.

We all sat up a little straighter.

And of course we lost.

But that Friday afternoon after Noel’s stamp of approval, defeat felt inconceivable. Unimaginable.

What Noel said carried great weight. His words had value and they were many. So many and often so funny that on other days you’d be sat there in stitches.

Noel knew he could talk and he celebrated that fact when recalling how he completely scalped one customer because he’d been distracted by his conversation with other customers.

“When I looked again,
all the hair was gone,” he
declared.

I’m not prone to remembering haircuts but any visit here had the potential to be memorable, entertaining or interesting. On many visits he was all three.

Noel once recalled how RTE came to record him and his customers. They spent the afternoon shadowing him as he moved around the barber’s chair like a boxer does a heavy bag, cutting, stopping, talking and then cutting again.

That experience must have been endlessly entertaining and Noel was almost certainly unaffected.

He was authentic, unflappable it seemed and it was obvious too that his way was to treat everyone the same while his ability to connect with everyone was disarmingly brilliant.

All his stories helped and he’d an arsenal of them to back up his life.

“Arsenal you said” I remembering seeing them once when I lived in London...”

He could latch onto a word like that and weave a story.

And the tee-ups came from everywhere. It’s Christmas week now. But on a Christmas week in years gone by he was telling a story about a game of cards that started in his barber shop on Christmas Eve and ran right through the night and into Christmas Day.

“The place was thick with smoke all night but we’d run out of fags by the morning so we were left fighting over the dog-ends on the floor,” he’d said.

It wasn’t just the turns of phrase it was the colourful imagery.

One of the best stories I can remember told of a knock on his barbershop door which interrupted another game of cards in the early hours of another weekday morning long ago.

When Noel answered, the stranger explained that he was lost and needed directions for the road to Dublin.

Noel invited him in and under the light, he realised that he was talking to the Middleweight Champion of the World, Paul Pender, now stood in Naas.

The Irish American boxer had been returning from visiting family in Clare when he’d lost his way only to stop when he saw the light in Delaney’s shop window.

“He beat Sugar Ray Robinson twice,” said Noel. “But no, that night he didn’t stop for a haircut!”

It felt like Noel Delaney had the personality that could attract this kind of experience and then the ability to weave it into a story with a killer line at the end.

Another day, another haircut and on this occasion he was stood talking about the former Irish boxer and tenor, Jack Doyle aka the Gorgeous Gael.

His unique take on things, the depth of his knowledge and his many quips, were part of his immense charm and kept people coming back.

Many customers were friends of course and kept coming for decades and followed him from Poplar Square up to Patrician Avenue when he set up beside his home in recent years.

The location had changed, but side alley off Poplar Square or back street on the side of town, the enormity of Noel Delaney’s personality never retreated into the background.

His charisma, his stories, his brilliant way of communicating, they kept him in the foreground right to the end.

A totem of local life, he was Naas really.

He was the best of it.