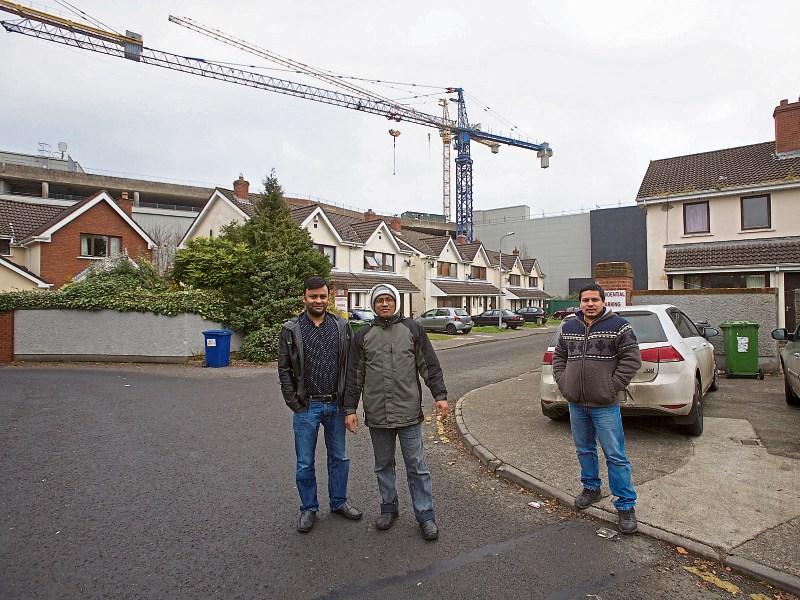 Cill Corbain residents Jashim Uddin (left) and Abdul Khalek with friend Mahambubar Rahamam (right). The houses are in the shadow of the derelict Naas Shopping Centre

A number of Naas families are facing into a search for new accommodation, having been told the homes they’ve been renting are to be sold.

Letters informing them of the decision have been issued to the tenants of the housing development of Cill Corbain.

The houses are immediately adjacent to the unopened Naas Shopping Centre, and the letters came from Marshalsea.

Marshalsea is the property development company which constructed the Shopping Centre — which was due to open exactly seven years ago.

Many of the adults living there are originally from Bangladesh and some have been living there for more than 10 years. In some cases they have young children attending local schools.

They are concerned that they may be forced to leave Naas and then try to find alternative schools for their children and perhaps alternative employment.

Some of them told the Leader that it will not be easy to find new houses in the Naas area because there is a shortage of suitable accommodation, some of which is being let for up to €1,500 a month.

“Some of us have children; effectively there are no houses in Naas because many landlords do not want us when they hear we have families. We have contacted people who are letting houses and when they hear they are dealing with a family they don’t call back. Our children have started school here and we would like them to continue to going to school in Naas,” said Abdul Khalek.

Another resident Fairoz Ahmed, who has two daughters attending the Mercy convent Primary School, said the residents would he happy to live there in the event of a sale if the new owner would be prepared to rent the houses - but they don’t know it this will happen.

“We have lived here a long time but we’re finding it’s difficult to get houses when you’ve children. I’ve lived in Ireland for nearly 16 years and about half that in Cill Corbain. A two bedroom apartment in Naas could cost €1,300 a month. The situation means our children are not allowed to live in a house, he added.

There are 20 adults living in the estate and almost as many children. Most are native of Bangladesh but are citizens of Ireland. Some of them have contacted Kildare County Council to seek housing.

They have also contacted Fianna Fail TD James Lawless who has written to Marshalsea seeking to have the tenancy arrangements maintained at least until a sale takes place.

“I’ve written to Marshalsea and they’ ve agreed to look at this as option. They are good tenants but private property is private property and I understand if they need to sell, that is their (Marshalsea) business,” Mr Lawless told the Leader.

No response was forthcoming to a request for a comment from Marshalsea.