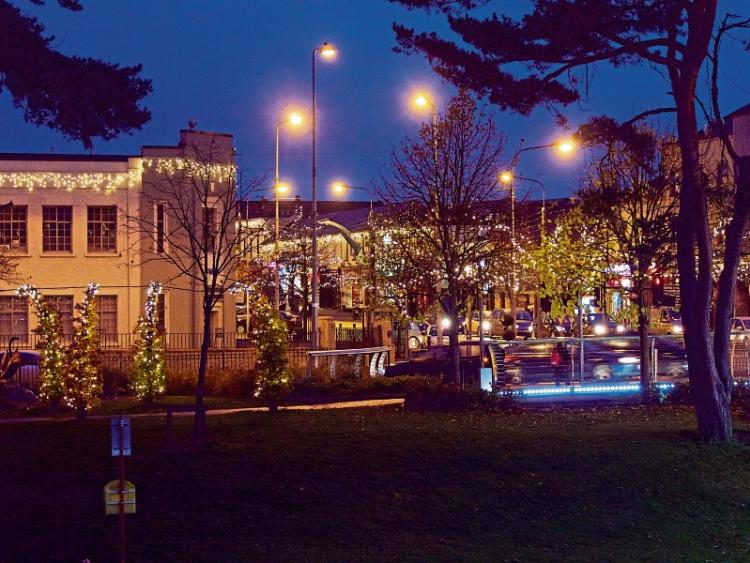 The Christmas lights in Newbridge

You would be forgiven for thinking Newbridge is a bustling town, a thriving town — the retail capital of Kildare. In essence, you would be right, but, dig deeper and you will find it’s not so straightforward.

Driving in to Whitewater Shopping Centre on a Sunday, traffic is often backed up to the Ballymany roundabout. The multi-storey car parks are jammed and the thoroughfares are booming. But take a step outside and make your way down Edward Street and onto Main Street and it can be a different story.

Despite the best efforts of the businesses and retailers, the number of shoppers dwindle as you continue down towards the Liffey Bridge.

If you step down a back street, you find corners littered with rubbish, derelict properties, footpaths in need of repair, galvanised gates and vacant units.

The Tidy Towns Association has done its best and has stressed a town centre redevelopment plan is needed in order for the town to progress.

At a recent Municipal District meeting Cllr Sean Power pointed out the council had encouraged people to move back to town centres, but then left the residents high and dry when it came to providing a pleasant streetscape. Apartments are crammed into dirty streets with little or no green space or landscaping.

The council said it is working on a plan, which will require co-funding from the National Transport
Authority. Of course, it has to be acknowledged the local authority was concentrating on the Town Hall and George’s Street before taking on other projects in the town.

Councillors feel the town centre is being left behind, abandoned. The legacy left by the abolishment of the Town Councils means Newbridge gets less funding than Naas.

Naas is looking very smart. You very rarely see an overflowing litter bin. However, it has to be recognised it is struggling on a
retail level compared to Newbridge. Out of town shopping outlets such as the Tesco at Monread are having an impact on the town centre.

Then take a look at Newbridge. Whitewater is based in the town and brings increased business into the main thoroughfare. The winter lights are up and have received great feedback. As Cllr Murty Aspell pointed out, Newbridge still is a good place to live and work, it just needs some work done in some areas.

A town centre redevelopment plan is vital for the survival and growth of this area.

This is the first step. The NTA hasn’t given a guarantee for funding but pressure must be brought on the statutory body, which is funded by tax payers money, to come on board.

If this plan is not put in place, businesses will continue to struggle. The back streets may be maintained but they won’t get the new lease of life they so desperately need. It’s been proven time and time again, by making somewhere an attractive place to shop, people will come.

Cllr Fiona McLoughlin Healy has heralded Westport as an example of what can be done when a plan is put in place. It is possible to save the Liffey side of Newbridge but action must be taken soon. In the run up to Christmas, locals must be encouraged to shop local. Take a stroll on the Liffey side, you never know, you might find yourself a bargain.