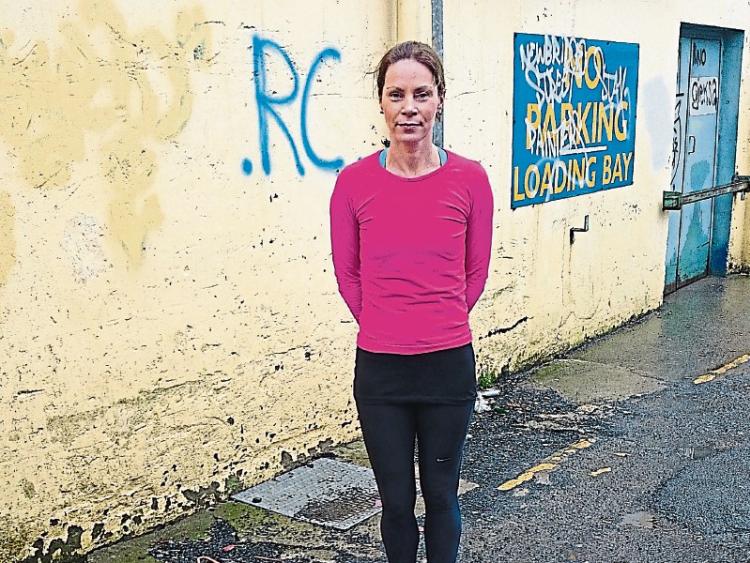 Nine months ago, the Leinster Leader went out to visit a business on the back street in Newbridge, which was struggling with customers being forced to dodge potholes, litter and illegal parking.

Since then, little has changed.

“It's worse than ever,” said local physiotherapist, Reiltín Treacy, “I am worried about my clients. People are out in the street taking drugs and drinking. Elderly people are passing there and I am afraid someone will be robbed or have their handbag taken.”

She said the parking attendant was enforcing parking laws in the area and as a result illegal parking had improved.

Back in February, Reiltín called for the council to fix potholes, install rubbish bins and repaint yellow lines on the street where she works.

Reiltín Treacy has her physio clinic and pilates studio on Limerick Lane and Dawson Street.

“It’s just metres from the Main Street and it’s in a terrible state. What other European town or city would have a street like this so close to the centre of town?” she said.

She said the local businesses have been campaigning for years to get work done.

“All we are looking for is the resurfacing of the road, lights and some bins.”

People congregate in the area at night drinking and the businesses and local residents have to clean up in the morning. She said workers from the Main Street often come down outside her premises to smoke during the day.

“I am constantly lifting rubbish from out behind the shutters every morning and putting beer bottles in bags and bringing them home to put in my own bins,” she added.

Reiltín said there are also a number of elderly residents living nearby who have difficulty getting down the street because of the potholes.

The mum of four from Narraghmore employs one full-time and one part-time worker.

She stressed she already had to close her clinic in Athy because she couldn’t afford to pay the rates. Reiltín reiterated her main concern is her clients.

“This is my workplace. It’s unpleasant for my clients too, who wants to come down a street like this? Why would anyone want to open a business here,” she said.