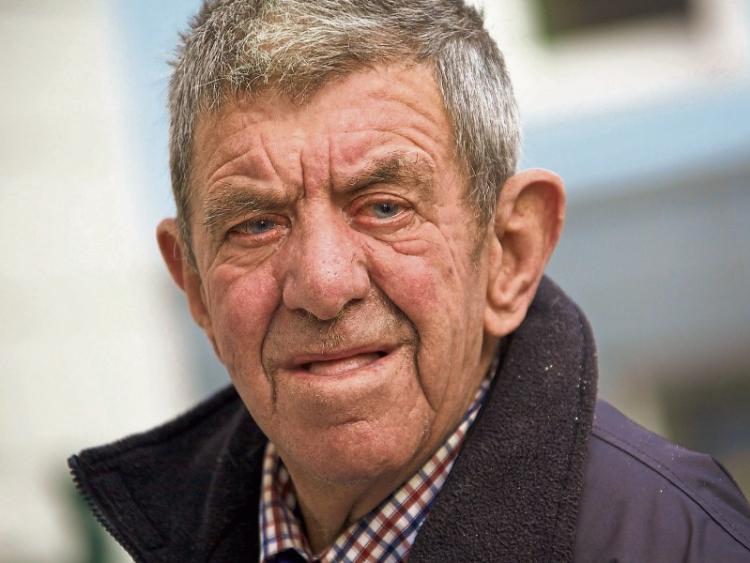 Paddy Hackett would have been impressed.

This was something more than a funeral; more than the enactment of a religious ceremony marking the end of a life.

Paddy’s death was a focal point for the coming together of people who know Naas more as a town with its own identity and less a growing sprawl of development driven by proximity to the capital.

It was a gathering of old Naas and we know there’ll be fewer of them as time passes.

Shortly after 11am on Wednesday last, the beech wood coloured coffin bearing the remains of one of the town’s best known citizens was borne from the Church of Our Lady and St David on the Sallins Road.

It was carried on the shoulders of six members of Naas GAA club and placed on top was a Naas GAA jersey.

More members of the club, wearing crested armbands, flanked the hearse as the cortege left the church grounds, snaking around Poplar Square and onto the Dublin Road, reducing the speed of the midday traffic to the pace of a stroll.

It’s slow progress continued on to the St Corban’s parish cemetery, interrupted briefly as it halted outside the entrance to St Corban’s Place, where the 82 year old died suddenly at his home two days previously.

Paddy Hackett was a man who lived an ordinary life.

His requiem mass was concelebrated by parish priest Fr Liam Morgan and retired curate Fr Jimmy Doyle, who served in Naas for many years and who shares Paddy’s enthusiasm for the GAA. It was a simple but poignant ceremony.

Padraig McManus delivered a funeral mass reading which included the lines “in the eyes of the unwise, they did appear to die, their going looked like a disaster, their leaving us like annihilation but they are at peace.”

Paddy was omnipresent in Naas. Fr Morgan said he was “part of our town, our parish, our local community.”

He told a story of two natives returning to a Naas that had changed utterly. As they were driving through, the place was so unrecognisable that one asked if they were in the right town.

“Indeed we are, there’s Hackett,” said the other.

There was a liberal sprinkling of Naas GAA members, some wearing the club colours, among the congregation who heard Fr Morgan recite part of Padraic Colum’s A Drover.

This was reference to Paddy’s early life spent herding livestock when it was possible to drive cattle along local roads from one fair to another.

“He worked as a chap; they were tough days, hard days (but) there was a survivor about him.”

Referring to the poem, Fr Morgan said Paddy would more likely to be thinking of a local dance than Colum’s “King o’ Spain’s daughter”.

Paddy, he noted, had a fondness for a bet, preferring to support individual jockeys rather than trainers or fluctuating prices.

The best day he had on the horses was when Frankie Dettori managed the near-impossible feat of piloting seven winners to victory on the same day, 20 years ago at Ascot. “His love of the GAA was constant to him, he liked being with the lads and being part of the club. It was his family. Imelda (his niece) kept an eye on him and club members also did.”

He had loyalty too — even refusing admission to a former president who arrived without a ticket to Fr Brennan Park (the former club home) for a function in 1973.

“I hope St Peter will be an easier man at the gates of Heaven than Paddy was that day,” Fr Morgan said to some laughter.

Morgan Lalor, a retired vice principal at St Corban’s boys primary school and who’s immersed in hurling in Naas GAA said “thanks very much” was a phrase Paddy frequently used.

He paid tribute to the many people who helped Paddy, like Pat Barrett, especially more recently as his health began to fail and to the Care of the Aged group.

He had a huge number of friends in Naas GAA he said like Donie Bracken, Mick Kelly, Timmy Coyle and Marie Kane “who has a heart of gold.”

Paddy didn’t drive and relied on others for lifts to games. In 1994 he was to travel with Pat O’Shea, Jack Phelan and Eoin Hearty to Aughrim for a provincial fixture between Naas and Kiltegan.

When he didn’t show, the trio went anyway wondering aloud as they entered the ground if Paddy had gotten there. “He’s in there alright,” said the man on the gate who overheard them.

“He was well known within the GAA.”

More than that though, added Mr Lalor, “he never complained about what life threw at him. He was the last great character in Naas.”

He is survived by niece Imelda and her children Alan and Deborah.