The Kildare-Meath epic that defined 1997

A struggle for the ages 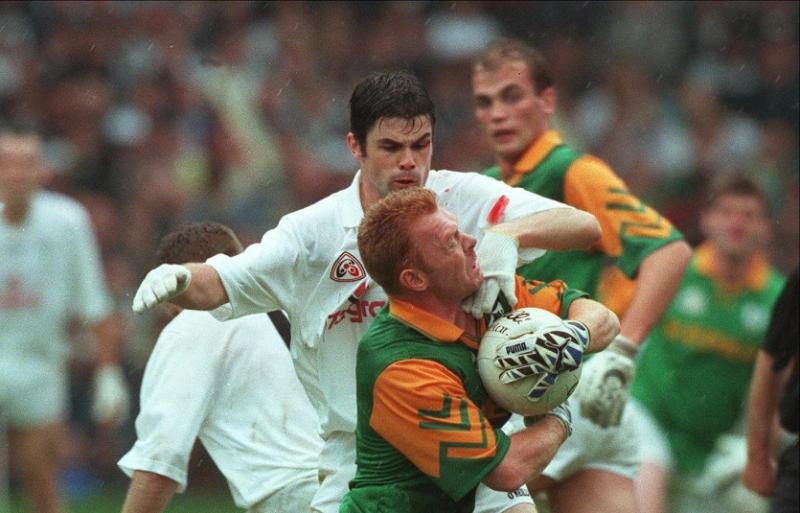 I GOT to thinking about the Kildare versus Meath trilogy when I was watching a game a few weeks back.

And I got to thinking how the memory overshadows anything else which happened in 1997.

Sure, Fianna Fail won the election and Mary McAleese the presidency but they pale against Paul McLoughlin’s last minute point which tied one of the greatest replays ever played in Croke Park.

That score was the climatic moment of a summer where Kildare exploded into my consciousness.

I had stood in the Hill for the first time only weeks earlier and watched Padraig Graven chip points into that Canal End to defeat Laois and who knew the mayhem, stress and euphoria the Royals would bring?

That summer I was pulling petrol in the Maxol and living at home. We were self-styled Fuel Injection Technicians but we could turn a hand to fiddling the work Rota when a Kildare game loomed.

And if the fixture burned slow at the outset, Niall Buckley kicked some astonishing points to ignite the fuse.

For the replay we teed-up Fennel’s coach from outside the Court House in Naas. The Merchant Archers knocked out the in-flight entertainment and to the air of The Leaving of Liverpool we pulled into Dorset Street and raised cans to the capital.

It was three pounds into the Hill 16 and writing that that feels as remarkable as one of Buckley's points.

Kildare owned the Hill and the Hogan; the Royals, the Canal and the Cusack.

Then, like it was scripted, Knuckles McLoughlin arriving from stage left in to rescue the final scene and earn a second replay.

Fennel’s Bus careered down to Kill on looped versions of 'We’re on the One Road' and 'Oh to be a Lily'.

I knew we had just witnessed something magical; something improbable because we clamoured and crushed to watch it again on Sunday Game. Did we see it right the first time? Buckley’s whooshing scores, Davy Dalton’s epic battle with Brendan Reilly, Glenner's perfect positioning for every play and Devine, five points IN A ROW!

I remember getting a lift to Naas in a Volkswagen Jetta and the shocks of that VW have probably never recovered.

There was three in the front, five in the back and the music came courtesy of one man in the boot: We’re on the One Road.....

By the third game the whole thing had turned deeply deeply personal; battle lines were drawn, someone stole across the border into Summerhill and dressed a stature of the Virgin Mary in Tegral white, allegedly.

The game was set for the August Bank Holiday Sunday and red flares burned in the Canal End to light up a sky coloured gun barrel grey.

Croke Park was divided and the atmosphere was hostile. We jammed into the Hill, the colour and the noise batting back and forth between the stands. Orchestrated roars surged from the Canal End, and the Hill replying with equal gusto.

All we needed was for Mel Gibson to ride into the the middle and pick a side.

It was raw and I swore I'd never leave a pound in Meath, not even Summerhill not Kells, not if Oasis came back to Slane.

Five minutes before throw-in, I saw Rory O’Connor from Lakelands being hoisted high on the hands of supporters. He rose up from the Hill wearing a hooded white protective suit from Donnolly Mirrors. As he went, I wondered if he would be able to maintain his balance and what might he offer if he did. With half of Meath watching on from the Cusack, he mischieviously raised a triumphant two fingered salute and the Hill erupted.

By the time Ollie Murphy goaled to put the trilogy to bed our heads had dropped, but no way could we couldn't consider a glance to the left.

All we could think about was the future and we talked about it, all the way home on Fennel's coach.