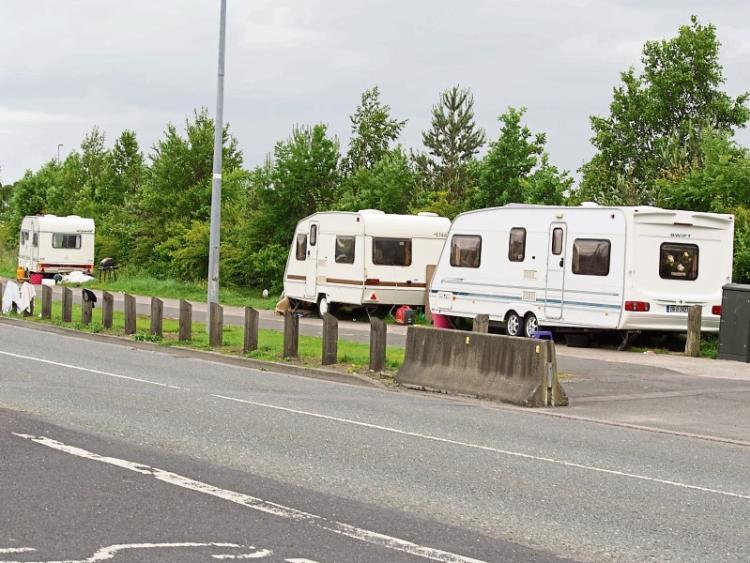 The caravans on the ringroad on Naas

Kildare County Council have conceded that no parking fines have been issued against the owners of vehicles parked on the ring roads around Naas.

The local authority have also said that the gardai have been requested to take immediate action against the owners of some of the vehicles.

Complaints that some vehicles have been stopped at least partly on footpaths on the ring road connecting the Newbridge Road and the Kilcullen Road have been made by local councillors.

A Council official said last week that no fines have been levied but she said the Council have contacted the gardai to deal with the matter.

It also emerged at a Naas Municipal District meeting that KCC is considering court action to deal with the vehicles and that the KCC believes the accommodation problem is more complicated because of a possible homelessness issue.

But Cllr Darren Scully said court action is not necessary.

“No court is required to deal with the illegal parking of vehicles,” he said adding that either a KCC warden or a garda can issue a ticket.

He said he wanted to know what the council is doing about illegal parking that is normally resolved by issuing a ticket.

He stated: “A blind eye is being turned to this. It’s not fair to the people who go to work, pay their taxes and fines. Why are we not enforcing the law of the land or asking the gardai to do it ?”

Cllr Seamie Moore said that KCC must act adding, “I’m finished with the council on this issue; I’ve a sore throat talking about it.”

But she also said the council will have to establish if anybody living in the area had a housing need — before any action is taken. The Kildare Traveller Network has complained about the lack of accommodation for Travellers.

PJ Dooley of the KTN said there is a lack of accommodation for Travellers in the form of group housing or halting sites in the Naas area and that Naas, as a county town, is unusual in that regard.

He suggested that local councillors should get to know people in these situations and press for their needs to be met by the State.

Mr Dooley said that while he could not comment on specific instances of caravans being parked on the ring road, he said Travellers are being left without housing for several years.

He also said Travellers have been forced to leave accommodation in the local area because the cost of rent has risen or because the landlord wants to sell the house that has been rented.