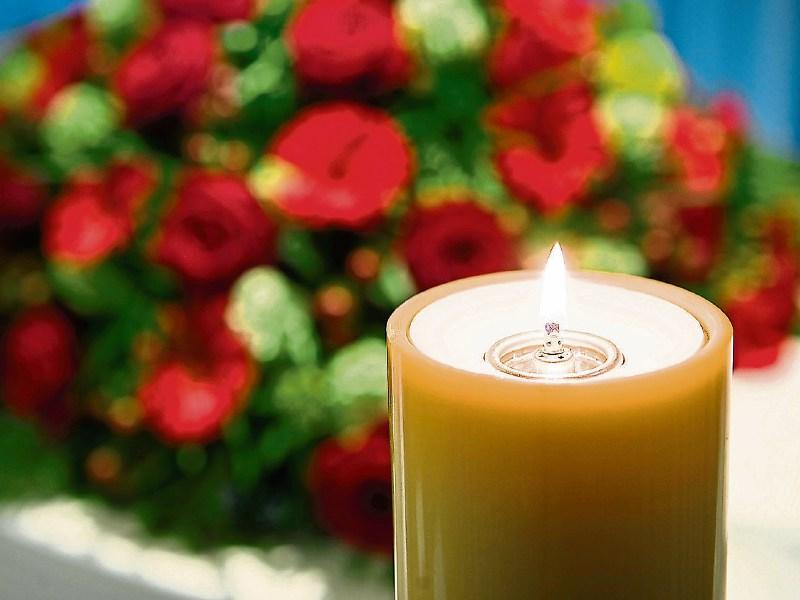 Formerly of The Curragh Camp. Wife of the late Pierce and mother of the late Joseph, Philip and Elizabeth. Sadly missed by her loving daughters Biddy and Anne, sons Mick, Pierce, Peter and Sean, sons-in-law, daughters-in-law, grandchildren, great-grandchildren, sisters Kathleen and Peg, brother-in-law, sisters-in-law, nephews, nieces, relatives, neighbours and friends. Reposing at her family home from 3pm on Friday with rosary at 8pm. Removal on Saturday morning at 10.15am to arrive at St. Brigid's Church, The Curragh Camp for Requiem Mass at 11am. Cremation afterwards at Mount Jerome Crematorium, Harold's Cross.

In the wonderful care of the staff of Connolly Hospital, deeply regretted by her son Joe and Bernie, grandchildren Carol and Lorraine, great-grandchildren, relatives and friends. Reposing at her home today, Wednesday from 4pm with Rosary at 8pm. Removal tomorrow, Thursday at 9.30am to St. Coca's Church, Kilcock arriving for Funeral Mass at 10am. Burial afterwards in Cloncurry Cemetery.

Reposing at her home on Friday from 5pm with Rosary at 8pm. Thereafterwards and at all other times. House Private Please. Funeral Mass on Saturday at 11am in St. Mary's Church, Maynooth. Burial afterwards in Mainham Cemetery, Clane.

The death occurred on October 4, of Pat Kelly, of the Lock House, Rathangan at Naas General Hospital. Deeply regretted by his loving sisters, brother, nieces, nephews, relatives and friends. Reposing at McWey's Funeral Home, Abbey View, Kildare Town from 4 pm this afternoon, Wednesday, October 5 with removal at 6.15pm to the Church of Assumption Rathangan arriving at 7. Requiem Mass on Thursday morning at 10am. Burial afterwards in St. Patrick's Cemetery.

In the 1950's, Kevin was educated at Blackrock College where he played for the Senior Schools Team, he was President of the Students Representative Council at University College Dublin and the Irish Students Association (now USI). For many years later, Kevin was President of the voluntary bodies - the Racing Club of Ireland and HEALS (for horse therapy).

Late of Clondalkin, Dublin 22, Athy, and the U.S.A. Aged 57, son of the late Tom and Olive of Newland’s Park, brother to Patricia, Michael, Caroline and Thomas. Sadly missed by his loving family, nephews, nieces, brother-in-law, sisters-in-law, his dear friend Kate, neighbour Joanne, relatives and many friends. Reposing at The George Mullins Funeral Home, Kilcullen Road, Naas on Thursday from 5pm with prayers at 7pm. Removal on Friday morning to arrive at the Church of The Immaculate Conception, Clondalkin for Funeral Mass at 11.30am followed by Cremation in Newland’s Cross Crematorium. Family flowers only please.

The death has occurred of Vera Constance Dunne, (nee Montgomery) of Celbridge and ex. Theatre Royal, Dublin on Monday, October 3 - peacefully, at home. She was the wife of the late Michael. Sadly missed by her loving daughters June (Gibbon) and Karen (Seaman), sons-in-law Gordon and David, grandchildren Andrew, Richard and Rachel, family and friends. Removal from Cunningham’s Funeral Home, Ardclough Road, Celbridge at 10.30am on Friday morning, October 7, to St. Andrew’s Church, Lucan arriving for Funeral Service at 11.00am followed by Cremation at Newlands Cross Crematorium at 1.30 O’Clock. Family flowers only please. Donations, if desired, to The Kildare Palliative Care Team.

Sarah (Sally) O’Connor (nee Murphy) of Rathnapish, Carlow and formerly of O’Connors Pub, Ballitore, passed away peacefully on October 1, after a short illness, at St Luke’s Hospital, Kilkenny. Beloved wife of Pat, much loved mother of Joseph, Owen and Brian and adored grandmother of Sarah, Kevin, Katie, Maureen, David, Seán and Matthew. She will be sadly missed by her loving husband, sons, grandchildren, daughters-in-law Marie and Maeve, cousins, relatives and friends.

Reposing at her home from 4pm on Sunday and her removal was on Monday at 12 noon to Ss Mary and Laurence Church, Crookstown, Ballitore, Co. Kildare (via Ballitore), arriving for Funeral Mass at 1pm. Burial afterwards in the adjoining

cemetery. Family flowers only please. Donations, if desired, to Crookstown Care of the Elderly.

​In the care of Park House Nursing Home, husband of the late Julia and father of the late John Francis, Margaret, Sheila and Seamus. Deeply regretted by his loving family Bernie, Yvonne and John, brothers Oliver and Paudge, sisters Bernadette and Margaret, sons-in-law, daughter-in-law, brothers-in-law, sisters-in-law, grandchildren, great grandchildren, nieces, nephews, relatives and friends. Reposing at Larkin's Funeral Home, Edenderry on Sunday. Her removal was yesterday, Tuesday, at 1pm, to the Holy Trinity Church, Derrinturn for funeral Mass followed by burial in the adjoining cemetery.