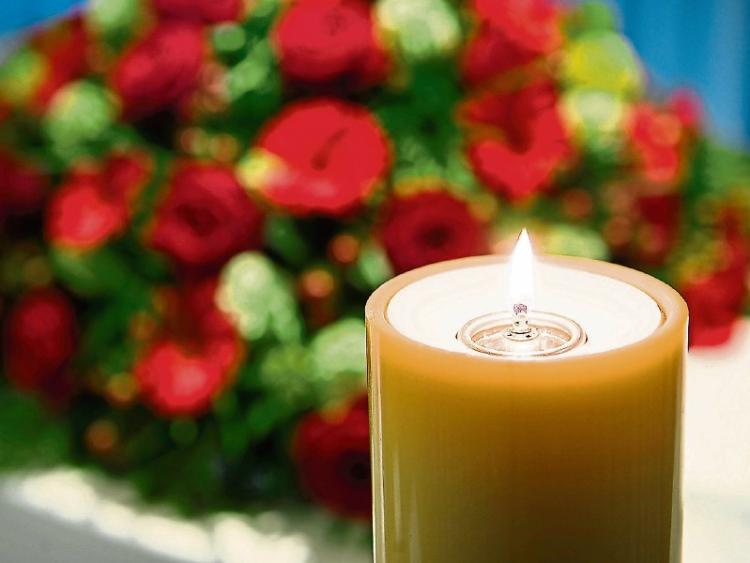 Reposing at Reilly's Funeral Home, Leinster St., Maynooth tomorrow, Friday from 4pm, with removal at 6.30pm to arrive at St. Mary's Church, Maynooth at 7pm. Funeral Mass on Saturday at 10am, followed by burial in Laraghbryan Cemetery. Family flowers only please. Donations, if desired, to Friends of St. Brigid's Hospice, Moore Abbey.

Died peacefully yesterday, Wednesday, September 28, 2016 at the Hermitage Clinic, Dublin. Dearly beloved daughter of Mary and the late Ned O'Reilly. She will be sadly missed by her sisters Maire and Orla, brothers-in-law Owen and Niall, nieces, nephews, relatives and friends.

Reposing at The George Mullins Funeral Home, Kilcullen Road, Naas today, Thursday September 29, from 5pm to 8pm. Mass tomorrow Friday, September 30, in The Church of Our Lady and St. David, Nass Parish Church at 10am. Removal to and arrival at Knightstown Church, Valentia Island at 8pm. Requem Mass on Saturday, October 1, at 11am followed by burial at Kylemore Cemetery, Valentia Island.

Reposing at his home yesterday, Wednesday with prayers at 6pm. Removal that evening at 6.30pm to arrive at St. Brigid's Church, Suncroft for 7pm. Requiem Mass today, Thursday, at 11am with burial afterwards in Holy Cross Cemetery, Suncroft.

The death has occurred of David Forristal. He is survived by his daughter, nieces, family and friends. Reposing at Stafford’s Funeral Home, North Strand Road, Dublin today from 3pm until 7.30pm. Removal, this morning to St Saviour's Church, Dominick Street for 10am Requiem Mass with ubrial afterwards in Glasnevin Cemetery, St. Paul's Section.

Reposing at her family home from 3pm yesterday, Wednesday with Rosary at 8pm. Removal today, Thursday morning at 10am to arrive at St. Conleth's Parish Church, Newbridge for Requiem Mass at 11. Burial afterwards in St. Conleth's Cemetery, Newbridge.

Family flowers only please. Donations, if desired, to the "Friends of Naas General Hospital ". Donations box in Church.

Reposing at his home on Tuesday from 5pm to 8pm. Funeral Mass was on Wednesday morning at 10am in St. Mary's Church, Chapel Hill, Lucan followed by burial in Deansgrange Cemetery, Blackrock, Co. Dublin. Family flowers only. Donations, if desired, to the Irish Heart Foundation.

Reposing at Rigney's Funeral Home, Athy yesterday, Wednesday, from 7pm with Rosary at 8pm. Removal on this morning at 10.30am to arrive at St. Michael's Parish Church, Athy for Requiem Mass at 11am. Burial afterwards in St. Michael's New Cemetery, Athy.

Reposing at his residence on Wednesday evening from 3pm. Removal to St. Patrick’s Church, Celbridge this morning arriving for Requiem Mass at 11am followed by burial in Donacomper Cemetery, Celbridge. Family flowers only please. Donations, if desired, to Diabetes Ireland.

Reposing at Anderson and Leahy's Funeral Home, Newbridge from 3pm on Tuesday with prayers at 7pm. Removal on Wednesday morning at 10.30am, to arrive at St. Conleth's Parish Church for 11am Mass. Funeral afterwards to St. Conleth's Cemetery, Newbridge.

Reposing at Rigney's Funeral Home, Athy yesterday, Tuesday, from 7pm with Rosary at 8pm. Removal on Wednesday morning at 10.30am to arrive at St. Michael's Parish Church, Athy for Requiem Mass at 11am. Burial afterwards in St. Michael's New Cemetery, Athy.

Reposing at the Chapel of Rest, Monasterevin on Tuesday evening with rosary recital. Removal on Wednesday, to St Peter and Paul's Church for 11am Requiem Mass. Interment afterwards in St Evin's Cemetery. Family flowers only please, donations, if desired, to the Irish heart foundation.

Reposing at his home today Tuesday from 2pm to 10pm. Removal on Wednesday morning, to the Church of the Immaculate Conception, Ballymore Eustace arriving for 11am Funeral Mass followed by burial in St. Mary’s Cemetery, Ballymore Eustace. Family flowers only please. Donations if desired to the Irish Heart Foundation.

The death occured of Kenneth Sherlock on September 25. Sadly missed by his loving parents Joan and Andrew, his sisters Elizabeth, Anne and Mary, his brother Andrew, brothers-in-law, sister-in-law, aunts and uncles, nieces and nephews, extended family, relatives and friends. Reposing at Anderson and Leahy's Funeral Home on Tuesday from 3pm with prayers at 8pm. Removal on Wednesday afternoon to arrive at St. Conleth's Parish Church for Mass at 2pm. Funeral afterwards to St. Conleth's Cemetery, Newbridge. Family flowers only please. Donations, if desired, to Focus Ireland.

Remains reposing at her sister Maureen's residence in Kilshanroe, Enfield, Co Meath on Tuesday evening with rosary. Removal on Wednesday afternoon to Kilshanroe Church for Funeral Mass  followed by burial in Dunfierth Cemetery.