'First day of playschool in Newbridge' 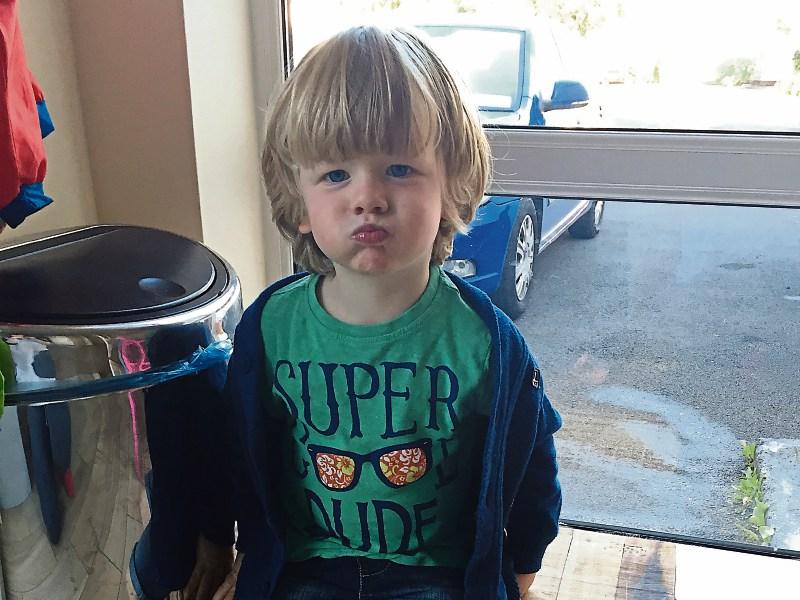 Last week I handed Aidan over the the care of Elsa, Charlene and Anita for his first of two years of playschool in Newbridge Family Resource Centre.

I was a little sad doing so, even though he has been minded by someone else mid-week since he was eight months old.

I was also worried. He’s giddy, rarely sits and rarely listens, to me or Daddy Chambers anyway.

He’s not so hot at sharing and won’t always eat without being prodded to do so.

And as mentioned in a previous column, his speech is a small bit behind so I worried about this too.

I worried he wouldn’t sit in ‘class’, and wouldn’t listen to instructions and worried he’d hog all the toys himself.

So, armed with his brand new and now beloved lunchbox from the Homestore and More in Newbridge, off he went last Monday morning.

The Resource Centre is a familiar place to him as he’s been going to the toddler group there for quite a while now.

He was expectedly a little reserved that first morning though, so I had to stay with him for five minutes before edging out the door.

And three hours later the reports were good. There wasn’t a bother on him thankfully.

I suppose, at three and a half, he was well ready for it.

As the week went on the reports remained good and he ran in every morning.

On Friday I stopped in the corridor to have a quick chat with my friend Geraldine, and in that split second he headed off in himself, knocked on his classroom door and that was that.

He didn’t even have time to say goodbye to me.

So it’s safe to say that the first week of playschool has been a resounding success.

He even begged me to go to school on Saturday morning and insisted I pack his lunch box!

Lets hope in the years ahead, he’s still as enthusiastic about school!

Aidan doesn’t always tell me what goes on, he’s not always able due to his speech but so far he’s reported back about ‘tip-toe time’, a worm and tells me he has loads of lovely friends, so I’m a happy mammy and he’s a happy boy.

I took last week off work to settle him in, and Daddy Chambers was off on Monday for his first day, so I went back in time and only had the one child to look after for the morning.

I must admit I enjoyed it too.

Myself, Daddy Chambers and Sarah had a browse and a coffee in Kildare Village on Monday morning, we went grocery shopping on Tuesday morning, we visited Kildare Farm Foods on Wednesday morning and had our breakfast in the Good Food Cafe in Michael Murphy’s on Thursday morning.

I won’t know myself next year when both of them are gone every morning.

While it was lovely hanging out, one on one, with Sarah, I suspect that the ‘terrible twos’ are on the way.

She’s not two until December but boy, are the tantrums becoming more frequent and she certainly knows what she wants.

Sitting in the Good Food Cafe for breakfast is most definitely not what she wants.

She would much rather be at home making me play the godforsaken Wagon Wheel by Nathan Carter on a loop. That’s what we did Friday morning when her brother was at school! I fear my windows will be smashed by one of the neighbours in I play it again, like your man in Derry did a while back!

It’s all back to normal this week. I’m back at work and instead of one, I’ll have two drop offs in the morning.

I’ll be dropping Sarah off at the childminders’ first and then Aidan to the Resource Centre before I head to work.

Lo and behold, I have worries about this too.

I’m worried that Sarah will lose the plot about going to the minder on her own, while Aidan remains in the car.

I’m worried that Aidan will lose the plot about not going into the minders, like he has done for the past three years.

I’m worried about being late for work, while I’m also a little sad that someone other than me will be collecting him from playschool.

I really enjoyed being off to do it last week and I was so happy that the first face Aidan saw when the door was opened was mine.

But needs must and I’m sure we’ll get used to the new routine in no time.

Did your little ones start playschool or big school last week? How did they get on?