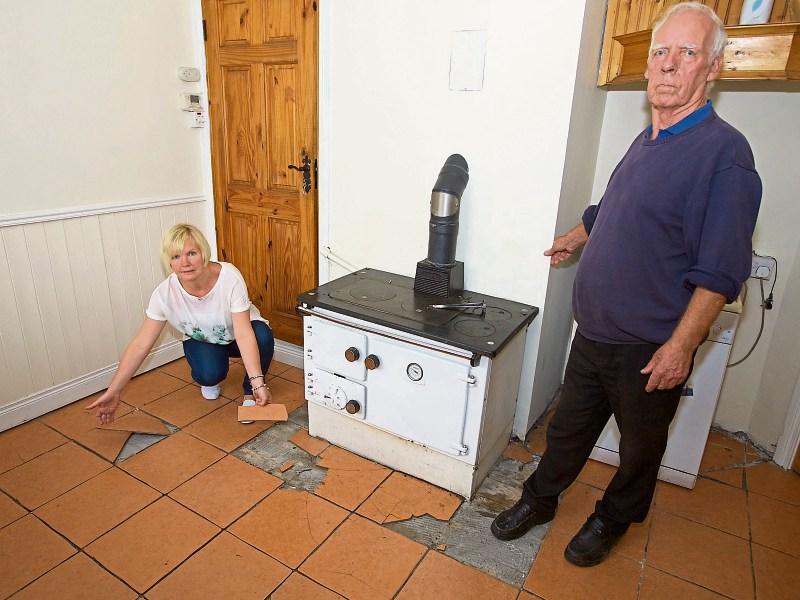 Frank Malone, with his daughter Mary, shows the damage due to subsiding in his house

The daughter of a 67-year-old Rathangan man is pleading with the council to repair his sinking kitchen floor and damp home.

Mary Malone says her father Frank has asthma and COPD.

“The council came and fixed some of the ceilings but they said they would be back to carry out the rest of the work,” said Mary.

“The kitchen floor is sinking, the range is sinking, there is a crack in the bathroom ceiling and the windows need to be done. It’s a damp house. He was in hospital there a while ago and he was diagnosed with COPD and he has asthma.”

She pointed out she had been in touch with the council, but felt she was being fobbed off. She said her father still doesn’t know when the workers are coming back to finish the repairs at his St Patrick’s Park home.

“He is up to date with the rent, in fact he is in credit,” she said.

It’s understood the works would be done under the €6.9 million regeneration project.

When asked specifically about Mr Malone’s issues, the council said it would not be commenting on individual cases.

However it did say: “The Regeneration and Remedial Works project for St Patrick’s Park Rathangan will be carried out in three Phases. Phase 1 involves the remedial and energy upgrade works to 22 occupied and vacant units in the upper part of the estate.

“Phase 1 will be carried out in five contracts or ‘Lots’. The Lots have been arranged so that there is a manageable amount of work in each Lot without causing too much disruption within the estate. In order to carry out the work it will be necessary to temporarily relocate residents within the estate while work is being carried out on their house.”

It said tender documents for the first Lot are to be issued this week and the works are expected to be completed around May 2017.

The council said drainage works, which were completed in June, had to be tackled prior to Phase 1.

“Kildare County Council met the residents committee in early July to update them in relation to progress on the project. A leaflet setting out the Phases 1 - 3 of the project was circulated in the estate in mid July and this leaflet set out the approach to Phase 1, the five Lots and an outline of the programme to complete all of the work in Phase 1,” said the spokesperson.

She pointed out a design team has been appointed for Phases 2 and 3, which involves the demolition of vacant houses, refurbishment of existing vacant and occupied houses, and construction of new houses. The council said these plans will be advertised and further consultation will take place.