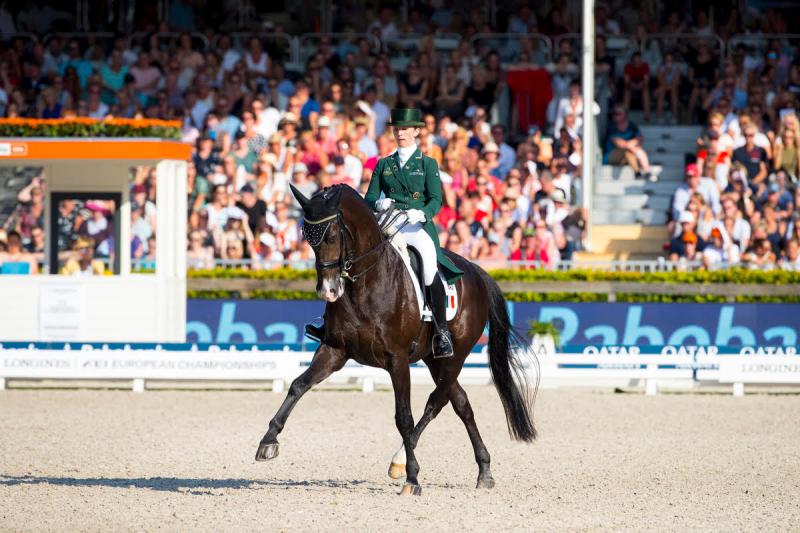 Irish Dressage star Judy Reynolds has finished on a high at the Longines FEI European Championships in Rotterdam, smashing another of her own Irish records on her way to a superb fifth place finish in last Saturday's Grand Prix Freestyle To Music.

Riding the Joe and Kathleen Reynolds owned gelding Vancouver K, Kildare native Reynolds achieved a score of 85.589% when last to go in the competition. That score was almost three percentage points better than her previous Irish Freestyle record of 82.750%, which was set at Neumünster World Cup show in Germany in February of this year.

During the course of this week in Rotterdam, Reynolds has broken all three of her own Irish international Dressage records in Grand Prix, Grand Prix Special and Grand Prix Freestyle To Music and helped the Irish Dressage team to qualify for the Olympic Games for the first time in history.

The Freestyle gold medal went to the unstoppable Isabel Werth (GER) and Bella Rose with an incredible score of 90.875%. It was an all-German podium with Dorothee Schneider and Showtime FRH taking silver (90.561%) while Jessica Von Bredow-Werndl collected the bronze (89.107%).

Horse Sport Ireland CEO paid tribute afterwards to Judy Reynolds and to the support team who made this such a memorable week for the sport of Dressage:

“This was another world class performance from Judy and JP [Vancouver K] this evening in the Kur [Freestyle To Music]. It’s been an incredible week for Irish Dressage at these Championships and Judy has consistently delivered brilliant performances all week. She is an exceptional athlete and her approach, dedication and professionalism embody high performance.

“I would like to thank the team behind the scenes who have played a key part in supporting our athletes. In particular Judy’s parents, Joe and Kathleen Reynolds who own JP and Judy’s husband Patrick, Libby who looks after JP, team vet Marcus Swail and physio Davide Focardi, High Performance Trainer Johann Hinnermann, Chef d’Equipe Milan Milan Djordjevic, The Horse Sport Ireland High Performance Committee, Dressage Ireland, and the team at Horse Sport Ireland who have provided exceptional administration, reporting and coverage of these Championships.

“Irish Dressage has reached a new level this week and we can now look forward to developing the team for next years Olympic Games in Tokyo and it’s a privilege to support these exceptional athletes. A final word of thanks to all the supporters who travelled from Ireland to support the ‘girls on green’ this week, Murphy commented.