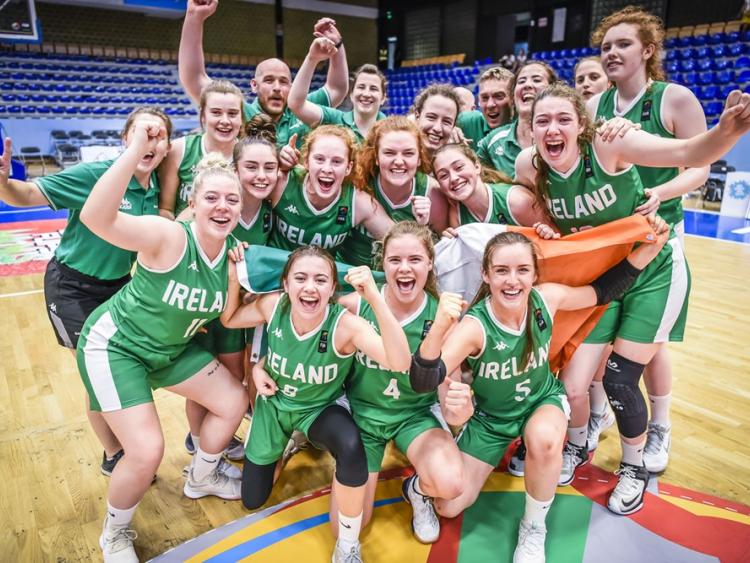 Ireland Under 20 women wrote another piece of Irish basketball history this evening as they ran out 60-57 point winners over Great Britain this afternoon, to not only win the bronze medal at the FIBA U20 Women’s European Championships Division B, but to also earn promotion to Division A basketball for Ireland at this age group for 2020.

Indeed, the majority of this squad are no strangers to making history, with today’s victory coming almost two years to the day of their historic silver medal win at Under 18 level in Dublin in 2017, which saw Ireland promoted to Division A basketball for the first time in the country’s history. Now, this talented team of players have done it once more, and did so incredible fashion, holding off at the death in the face of a late British comeback to hold on and win by three points.

It wasn’t an easy battle with GB though, with both sides knowing each other inside out having met earlier in the tournament at the group stages and indeed, on and off throughout numerous games over the years. Ireland started with a bang though, driving into a 22-7 opening quarter lead, and pushing that out to a 41-24 point half time lead, thanks to superb defense and a high-paced and high-intensity offense.

Great Britain weren’t going down without a fight though, and by the midway mark in the third quarter, they had closed the gap back down to eight points, 46-34, thanks to some big three point shooting. Melia, Maguire and Finn were all key in this period for Ireland, but GB’s Holly Winterburn began to knock down some big scores and it was a six point game going into the last, 50-44.

A nail-biting fourth quarter followed as, despite Melia widening the gap out to 10 points once more, GB replied immediately with a big three pointer, and GB’s Shauna Harrison slotted home another three moments later and also went to the free throw line and suddenly, it was 56-53.

Another basket for GB made it a one-point game, before Melia again widened the gap. GB’s Ebony Horton drove through for a score though and with just over a minute and a half on the clock, it was again, a one-point game. A massive steal by Melia as the clock wound down saw her finish with a layup to leave the closing minute on tenterhooks for Ireland, but they held firm in the face of big GB pressure right up to the buzzer to win out 60-57 and secure a bronze medal and promotion.

Speaking afterwards, head coach Martin Conroy stated: “That was just amazing. I spoke beforehand about those 12 women and what they’re capable of and how good they are together. The first quarter today was just immense, the defense we played holding Great Britain to just seven points and putting 22 up at the other end was just phenomenal. GB are such a good team, they were always going to run at us, and they came right back at us and got it back to one point at one stage, we did the right things though.

"We don’t have to do much with this team as coaches, as they’re just phenomenal players and there’s such unity there, their will to win is immense. This is twice they have won a European medal and I’m just the lucky one who was given the job to come on board with them and a fantastic staff. We’ve had our ups and downs this week, we’ve a had a couple of losses that we're probably unhappy with, but the way we bounced back every time, is just incredible. I am so happy for each and every one of them.”

Ireland Under 20 women will arrive back to Dublin Airport tomorrow, Monday, August 12 on Turkish Airlines flight TK 1977 from Istanbul at 3.35pm to Terminal One.