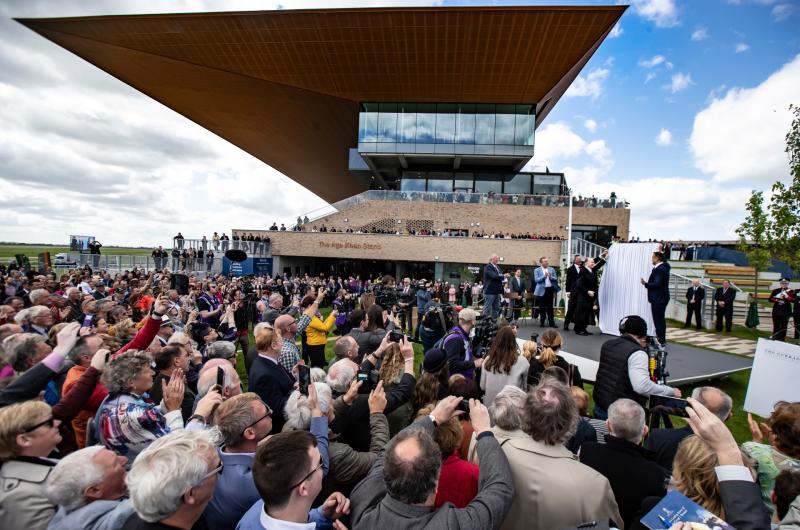 The new Curragh Racecourse was officially opened today during a spectacular opening ceremony by An Taoiseach, Leo Varadkar and His Highness the Aga Khan.

The centrepiece of the redeveloped racecourse is The Aga Khan Stand which can cater for up to 6,000 people over four levels.

Thousands of people attended the Grand Opening Weekend which marked the historic opening of the new Curragh Racecourse.

The two year, multi million euro redevelopment includes the spectacular new The Aga Khan Stand, refurbished stable yards and parade ring and bespoke facilities including conference capabilities and restaurants. In addition, the gallops which are located across the Curragh plains have also been upgraded.

The Aga Khan Stand’s striking 7,000 square metre roof can be seen from across the Curragh and provides valuable shelter for racegoers during inclement weather. There is also spectacular in-door and sheltered vantage points looking straight onto the track.

The historic Queen’s Room, which was relocated as a standalone feature and reassembled block by block from the old stand, is a stunning feature that overlooks the large parade ring.

Commenting on the opening, An Taoiseach, Leo Varadkar said: “The Curragh has always played an important part in the story of our country and, thanks to this new development, we can be confident that it will play an important role in our future as well.

“The Curragh has gained much more than a new stand.  This is a complete redevelopment which will match the best in the world. The Government, through Horse Racing Ireland, invested over €36 million in this project, about 40% of the total cost, because we recognised the significance of the Curragh to Irish society.

“I would like to congratulate everyone involved in this two-year project. Irish racing fans have long been able to see some of the very best racehorses in the world compete here.  Now, thanks to this development, the facilities on this side of the running rail will match the action on the track.”

"We are delighted that we now have the facilities for our racegoers that match our world-class race track. The redevelopment would not have been possible without the support of Horse Racing Ireland, the Irish Horseracing Regulatory Board and the investors who provided great support and assistance over the last number of years. This valuable contribution to the racing industry is greatly appreciated and will act as a focal point for horse racing and for the entire Curragh and Kildare community for many decades to come.”

The redevelopment has made the Curragh Racecourse one of the most modern and sustainable racecourses in the world and can compete with the best venues on the international racing forum.

The materials for the new grandstand were chosen for their links to local flora, geology and the rural context in which they are set

The parade ring has been expanded to over 180 square metres with a theoretical six metres for each horse A landmark at the Curragh ‘The Queen’s Room’ has been restored to its former glory and relocated as a standalone feature close to the parade ring having been moved and reassembled block by block from its previous location. It will serve as a place for race winners to be welcomed back to. The Queen’s Room was built in 1853 and in 1861 hosted the visit of Queen Victoria who was in the Curragh to visit her son the Prince of Wales (Edward VII)

Two large leather feature walls are located on the second floor. These unique hand-crafted leather etchings of the local area and of the Racecourse were created by the master craftsman, Garvan de Bruir. De Bruir Leather is an internationally recognised company, located in Kildare town.

There are four floors with the first two floors including a café, food court, bars and tote facilities. Level three and four have a variety of bars, restaurants and hospitality suites.

In addition to the stand facilities, all of the stables and gallops have been refurbished and upgraded. These facilities are used by local horse trainers every day as they prepare their horses for races across the world.