On Kildare's fareways: Some major rule changes on the way

Reminder: All golf cards, home and away must be returned 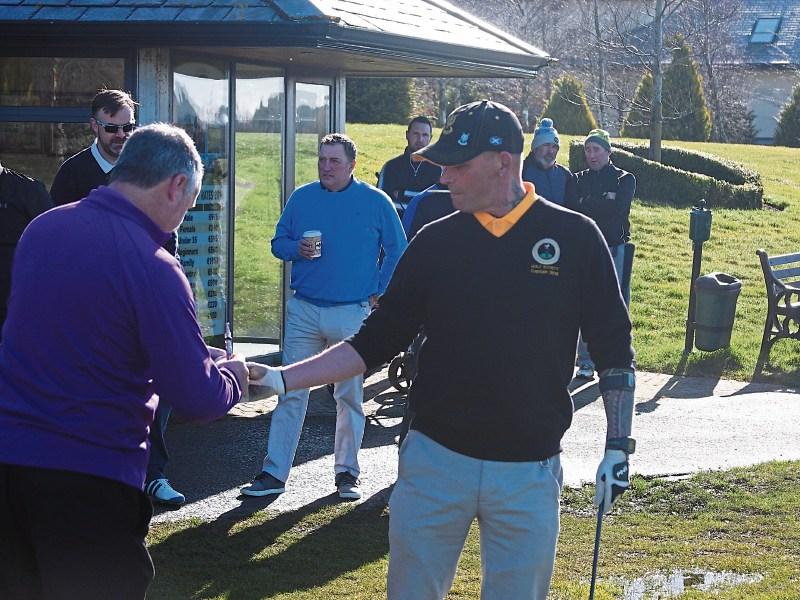 Johnny Edmonds, incoming captain of Harrigans (Newbridge) golf society pictured at his Captain's Drive In at the Heritage

It probably generates more conversation than any other part of the game of golf and that is handicapping.

Now the governing bodies for golf in Ireland have joined forces in an effort to tackle cheating and safeguard integrity in the handicapping system.

“There is still a culture of tolerating handicap cheating in golf.Just because others are cheating the system does not make it okay,” says Pat Finn, CEO of the GUI.

“For club golfers, the integrity of the game depends on each individual observing the spirit and intent of the handicapping system,” says Sinead Heraty, CEO of the ILGU.

The awareness campaign runs over two weeks from 21 March to 4 April. Golf clubs and their members will have access to key information and resources on handicapping through the GUI and ILGU website, www.thefairway.ie

The main focus of the handicap awareness campaign is player responsibilities.

“Consistent handicapping demands the return of all scores from players with a CONGU handicap. It is the obligation of the player to ensure that all scores, both home and away, are returned to ensure fairness for all within the game,” says Sinead Heraty.

Meanwhile come January 2019 some very important rule changes will come into play; this after extensive research and feed back which began back in 2012.

The new rules include:

Dropping procedure: when taking relief (from an abnormal course condition or penalty area, for example), golfers will now drop from knee height. This will ensure consistency and simplicity in the dropping process while also preserving the random-
ness of the drop.

Measuring in taking relief: The golfer’s relief area will be measured by using the longest club in his/her bag (other than a putter) to measure one club-length or two club-lengths, depending on the situation, providing a consistent process for golfers to establish his/her relief area.

Removing the penalty for a double hit: The penalty stroke for accidentally striking the ball more than once in the course of a stroke has been removed. Golfers will simply count the one stroke they made to strike the ball.

Balls Lost or Out of Bounds: Alternative to Stroke and Distance: A new Local Rule will now be available in January 2019, permitting committees to allow golfers the option to drop the ball in the vicinity of where the ball is lost or out of bounds (including the nearest fairway area), under a two-stroke penalty.

It addresses concerns raised at the club level about the negative impact on pace of play when a player is required to go back under stroke and distance.

The Local Rule is not intended for higher levels of play, such as professional or elite level competitions.