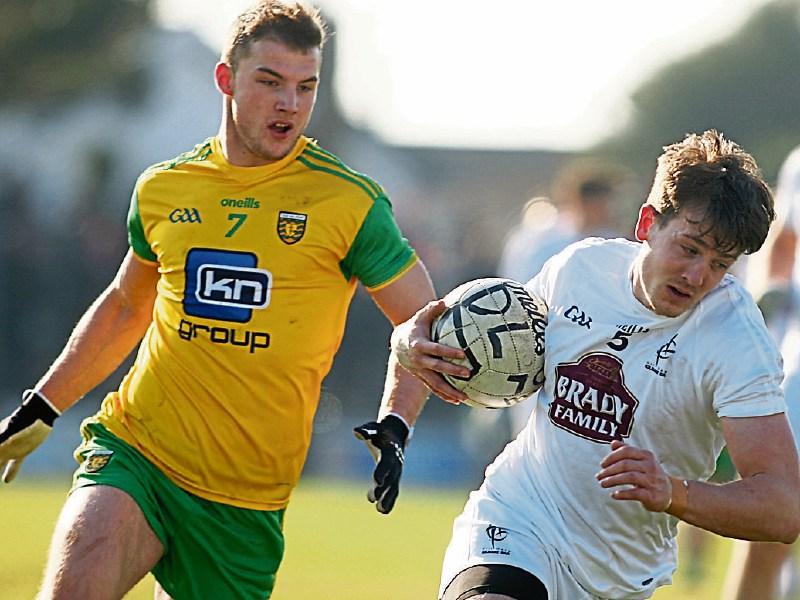 Kildare, playing with 14 men since the 17 minute when captain Eoin Doyle was sensationally sent off on a second yellow, for no gum shield, battled bravely and were level late in the second half but a fortutious goal saw Donegal take the two points and record their first win of the Allianz Football League in Ballyshannon this afternoon.

Kildare captain, Eoin Doyle, having been told by referee Gough to get his gum shield, was on his way to the line to get one, when a kick out from Mark Donnellan came his way which he caught but immediately the match official issued him with a yellow, having already picked up one earlier for a shoulder charge, this was his second.

To compound matters the match official allowed play to carry on  before moments later having been told that Doyle was already on a yellow, then sent off the Naas man in one of the most controversial sendings off of the season.

Kildare manager, Cian O’Neill was furious after the game describing the decision as “disgraceful”.

“Our man was attempting to get a gum shield when the ball was kicked to him; a boy of 4 years of age would automatically go for the ball; caught the ball; referee banished a yellow card and just to compound how bad the decision was he didn’t realise he already had given him a yellow card; figure that one out.”

The Kildare manager said his player had a gum shield “it was knocked  out of his mouth and was on his way over to the line to get another one; what I am most annoyed with is that the officials are ‘miked up’ and supposed to communicate to be better at their job, the lines man was beside men and heard our player tell us he needed a gum shield, all he had to do was to buzz the referee and say to be fair he  was coming off the field to get a new gum shield and lets me fair, you are supposed to be fair and impartal, he didn’t do that.”

So it was real heartbreak for Kildare, who also had a goal disallowed in the opening half when on a 2 to 1 with Donegal keeper but the goal was ruled out when Ben McCormack elected to pass to Daniel Flynn who filled the net but was adjudged to be in the square.

Kildare led by just one at the break, playing with a strong breeze, and this was crucial as Donegal stepped up a gear on the resumption looked at times like they would pull clear but the visitors battled and battled, found the Donegal net twice from Niall Kelly and David Slattery before finally giving way with that late goal from Ryan McHugh ehose point attempt deceived Mark Donnellan and went over his head in to the net.