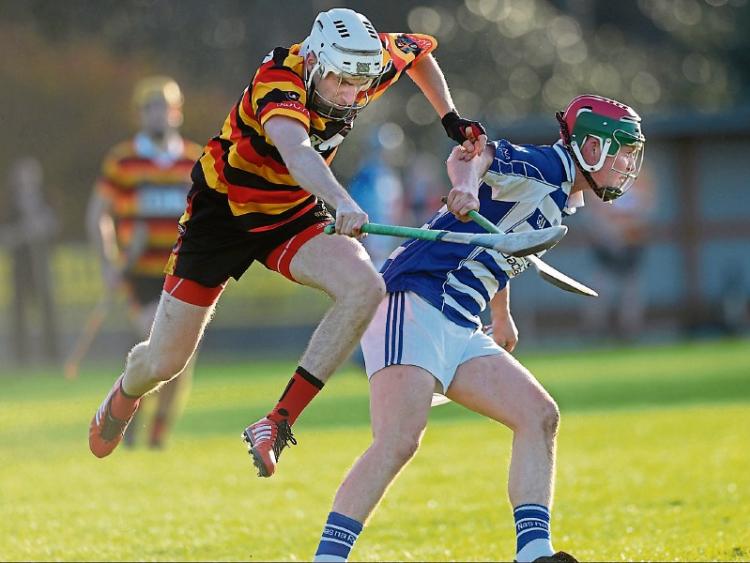 Paul Fitzgerald of Ardclough is sent flying in a hard clash wth Odhran Loughran of Naas in the SHL game at Naas. Photo: Adrian Melia

So Naas return to St Conleth's Park on Sunday hoping to rectify the disappointment of just 12 months ago when, on their own admission, “they failed to perform” Celbridge seeing them off somewhat comfortably.

Ardclough, on the other hand, are hoping to return to the great days that saw them contest no less than nineteen senior hurling titles in a row.

And when you consider that out of the first fourteen finals they won just four before winning five titles in a row ('79-'83) you can imagine what returning to county final means to the club, winning their last two titles back in 2004 and 2006, while their last appearance was in 2015 when losing out to Coill Dubh by just two points.

Over the last number of years the work put in by Naas at underage level on the hurling has been nothing but phenomenal, that has seen them winning at Féile level and underage level all the way up.

Such is the strength of underage hurling in Naas they have competed successfully in Kilkenny leagues, having been given special permission such has been their strength in recent times.

Unbeaten this year, to date the boys from the county town have captured the league, gone through the championship unbeaten and will go into Sunday's final as firm favourites to bring the cup back to Naas.

Ardclough, on the other hand, have made it thus far the hard way, having to require a replay against Confey in the semi final before booking their place with a late goal from corner back Eoghan Walsh.

Naas, unbeaten throughout the season will be most observers fancy to take the title. Jack Sheridan is a player that is capable of winning any game and along with Ross Bergin, Paul Sullivan, Sean Gainey, Eoin O'Hehir, Mick Purcell, Richie Ryan, not forgetting keeper, and captain, Cormac Gallagher, look to hold most of the aces.

But if there is any team capable of upsetting the favs it is the boys from Ardclough, who will absolutely thrive on coming into this as the underdogs. One can argue more than one or two of their players could be described as seasoned campaigners but experience can count for an awful lot when it comes to county final day.

When the Fitzgerald boys are on form they can be a handful for any team; the Spain lads know every blade of grass at St Conleth's Park at this stage as does Colm Buggy, Aidan Buggle (goals) and Richie Hoban, and as they showed against Confey they have a few lads on the bench that can be match winners on their day.

Having said all that one feels that Naas will not make the mistakes of last season, albeit against different opposition, but if they are to get over the line they will have to be at their best, anything other than that and the boys in black, red and yellow will take full advantage.